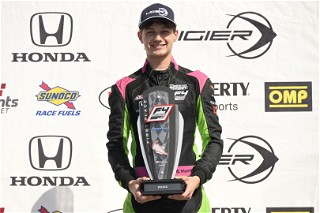 ALTON, Va. (October 8, 2022) – Bryson Morris scored his third Formula 4 United States Championship Powered by Honda (F4 U.S.) win of the 2022 season on Saturday afternoon during the Andy Scriven Memorial at the Mission Foods VIR SpeedTour. Entering the weekend second in points, Morris had his sights set on points leader Lochie Hughes (No. 6 Jay Howard Driver Development / CSU One Cure / Lucas Oil / Pelican Ligier JS F4), but Hughes only made it as far as his rearview mirror in Race 2.

Morris’ teammate, Ryan Shehan (No. 66 Crosslink Kiwi Motorsport Ligier JS F4), lined up first for the standing start after setting fast lap on his Hankook Tires in the previous race. Noah Ping (No. 65 Velocity Racing Development Ligier JS F4), who rolled off second, went off in Turn 1 to fall to the back of the running order and bring out the full-course caution. With the field restacked, the action really heated up when the race restarted and gave the field another chance at jockeying for position.

With the top four coming toward Turn 1 four-wide, Andre Castro (No. 8 Future Star Racing Ligier JS F4) jumped to the lead by the time they made it through the turn. Just one lap later, Morris overtook the lead again going into Roller Coaster. With Morris solidly out front, points leader Hughes turned up the heat. After rolling off 18th, Hughes had picked up eight positions before the caution flag waved, and as the minutes ticked down, Hughes moved into the second position with less than four minutes left on the clock.

Ultimately, it was Morris who led the field to the checkered flag. Hughes finished second, followed by Castro in third. A post-race stewards decision assessed a 30-second penalty against Castro, which gave the final podium position to Morris’ Crosslink Kiwi Motorsport teammate, Shehan.

“It was a good race,” said Morris after climbing from the car. “It was a bit of a sketchy restart, but I was able to get by and to the lead at a good time. Then, luckily, they started battling behind me and that was enough for me to pull up a gap and just bring it home.”

F4 U.S. will conclude its Andy Scriven Memorial weekend at the Mission Foods VIR SpeedTour with Race 3 tomorrow at 9:30 a.m. ET. Stream the race live on the SpeedTour TV YouTube page, or follow F4 U.S. on Facebook, Instagramand Twitter for updates. Live timing and scoring will be available via Race Monitor.