Launched in 2014, the Fédération Internationale de l'Automobile (FIA) Formula 4 Championship was created to offer young racing drivers around the world the opportunity to take the first step from karting into the world of single-seater racing. Designed to be a globally recognized yet affordable step between Karting and the FIA Formula Regional Championship, FIA Formula 4 allows drivers to compare themselves to the best young talent, not only in their own country, but across other championships around the world. The FIA is an association established as the International Association of Recognized Automobile Clubs to represent the interests of motoring organizations and motor car users. The FIA is mostly known as the governing body for many auto racing events. The FIA also promotes road safety around the world. 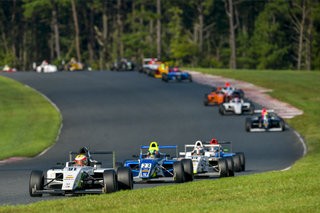 In 2016, SCCA Pro Racing and the FIA combined forces to create the F4 U.S. Championship. F4 U.S. teams and drivers are aligned with the FIA and series partners: Honda, Honda Performance Development, Hankook Tire America and Ligier Automotive. Having the F4 U.S. chassis manufactured in the United States by Ligier Automotive, the Honda Civic Type R motor built in Anna, Ohio, and the Hankook tires marketed and distributed out of Nashville, Tennessee, aids in affordability and availability.

The Championships have continued to grow thanks to support and partnership with Parella Motorsports Holdings taking over the commercial rights in 2021. FR Americas is one of several series showcased during the SpeedTour festivals of speed along with FR Americas, the Trans Am Series, Sportscar Vintage Racing Association (SVRA), and the International GT Series.

Each race weekend offers plenty of track time for drivers: test and official practice sessions, 30 minute qualifying session, and three 30-minute races/rounds per weekend. Altogether, the drivers have nearly four hours of track time, allowing them to increase their experience in open-wheel racing while still making time for driver development.

One of the Championship’s greatest strengths, compared to other young driver categories, is the advanced driver development offerings available to participants. Between series-organized learning opportunities and  analytical work carried out by the drivers in cooperation with their engineers, F4 U.S. prepares drivers in a unique way. The series is a spec series, allowing multicar or single car teams the same opportunity of success with capped costs; however, the cars allow for significant setup adjustments, which increases the drivers’ technical knowledge and gains experience required for moving up the open wheel ladder, whether with a large or small team.

The top three finishing drivers at each individual round will receive prize money. Additional contingency awards will also be giving out including the Omologato Perfectly Time Move of the Race. At the Champions Banquet, scholarships, prize money, and contingency awards, including Super License Points, are handed out to drivers finishing high enough in the Championship points. In total, drivers participating in the F4 U.S. Championship are eligible for over $275,000 in awards and scholarships. Additional information about the Champions Scholarship is available here.

In 2018, SCCA Pro Racing introduced the FR Americas Championship, offering the next step in the open-wheel development ladder. These two Championships are some of the fastest ways for an aspiring driver to gain experience to an international racing platform. With driving training, unmatched affordability and strong manufacturer support, competitors can grow and succeed into the higher levels of motorsports.

Find out more information on the Championship by taking the next step: