2020 F4 U.S. Champion Hunter Yeany Back in the Paddock at NJMP 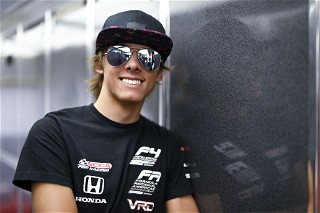 Sidelined from FIA F3 competition in Budapest due to a broken wrist, the native of Virginia Beach, Va., traded in his trip to Hungary for a visit to NJMP, assisting his F4 U.S. championship-winning team. In 2020, Yeany amassed seven wins and 13 podium finishes with Velocity Racing Development (VRD) enroute to the 2020 Driver Championship title. He has remained close with the organization ever since.

While in New Jersey, Yeany was on hand to advise the team’s young F4 U.S. drivers in their quest to the championship.

“I’m just here for assistance—trying to help the drivers as much as I can,” said Yeany. “Even though I race in another series, I’m in contact with the VRD drivers. We have a group chat where we normally talk every once in a while. Sometimes we’ll get on the sim together. For instance, Noah [Ping, current F4 U.S. driver]—I hadn’t met him until this weekend—we’ve run laps together on the sim and we’ve talked on the phone.”

The youngest champion in F4 U.S. history at just 15 years old, Yeany has been on the fast track ever since. In 2021, he joined VRD to compete in both the Formula Regional Americas Championship Powered by Honda (FR Americas) and Indy Pro 2000 Championship, before making his BRDC British Formula 3 Championship debut with Fortec Motorsports. When the opportunity came for Yeany to move to FIA F3 competition a bit early, he jumped at the chance to make a pair of starts to prepare for his 2022 season.

Just three years after making his single-seater car racing debut in F4 U.S., Yeany signed on with Campos Racing to race fulltime in the FIA Formula 3 Championship in Europe. Even now, the driver still credits his time in F4 U.S. and FR Americas for helping get him to where he is today.

“It really helped me prepare with the fundamentals of racing and just being in a race car,” said Yeany of his time spent in F4 U.S. and FR Americas. “The F4 car is slower, but it’s still a race car and it’s really good to learn in. FR Americas helped with learning aero wash because it’s a faster car and you can’t follow as close in the corners.”

When asked what advice he had for young drivers, Yeany’s response was succinct: “No matter how far away your goal may look, it’s always closer than it seems. Keep working as hard as you can. Even if you aren’t sure that you’ll make it, you at least have a chance if you work hard and do everything you need to do.”

VRD remains in the thick of the F4 U.S. Team Championship hunt, hoping to back up their 2021 win. The organization is currently ranked second in the standings, just 22 points behind Crosslink Kiwi Motorsport. Two VRD drivers are also vying for the Driver Championship title, with Noah Ping (No. 65 VRD Ligier JS F4) currently ranked third, and Matt Christensen (No. 45 VRD Ligier JS F4) ranked fifth. In addition, the organization competes in FR Americas with Rodrigo Gutierrez behind the wheel of the No. 10 VRD Ligier JS F3.