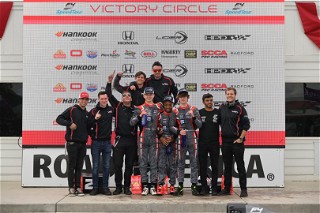 PLYMOUTH, Wis. (May 22, 2022) – Noah Ping secured his first Formula 4 United States Championship Powered by Honda (F4 U.S.) series win at Road America in Race 3 on Sunday afternoon. In commanding fashion, Ping led the field from lights out to the checkered flag in the No. 65 Velocity Racing Development (VRD) Ligier JS F4. To make the race even more special, Ping was able to share the podium with his VRD teammates Matt Christensen (No. 45 VRD Ligier JS F4) and Nicholas Rivers (No. 24 VRD Ligier JS F4), as it was a clean sweep for the Atlanta-based team.

With Ping out front for the entire 20-minute race, the real action was behind him.

Cars were gridded based on their fastest lap of the previous race, so despite winning the first two races of the weekend, Christensen lined up fifth for Race 3. He instantly found himself in a fierce battle with Alex Berg (No. 08 Doran-Kroll Competition Ligier JS F4) and David Burketh (No. 8 Future Star Racing Ligier JS F4). Solidly hitting his marks, he was able to overtake both drivers to lock in the third position. From there, Christensen set his sights on teammate Rivers.

Rivers was fourth at lights out, but a solid start and meticulous first lap catapulted him to the second position. He raced unchallenged until near the halfway point as Christensen closed the gap, setting fastest lap and besting his teammates lap by nearly one second. Christensen kept the pressure on high and was able to move past Rivers on lap 5. From there, the three VRD drivers ran single file to the finish.

When the checkered flag waved, VRD completed the podium sweep with Ping, Christensen and Rivers, respectively. Lochie Hughes (No. 6 Jay Howard Driver Development / CSU One Cure / Lucas Oil/ PelicanLigier JS F4) was fourth and Bryson Morris (No. 38 Crosslink Kiwi Motorsport) was fifth to round out the top five.

“It’s a really great feeling to be here in F4 on top podium,” said Ping after the race. “There’s nothing quite like it. Shout out to the VRD guys; obviously our cars were pretty quick here to go one, two, three. Congrats to my teammates it's a big accomplishment for us.”