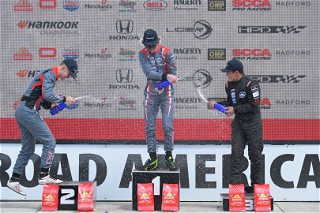 PLYMOUTH, Wis. (May 22, 2022) – Matt Christensen, driver of the No. 45 Velocity Racing Development Ligier JS F4, went back-to-back in Formula 4 United States Championship Powered by Honda (F4 U.S.) competition, winning the opening two races at Road America. In a race with plenty of action, Christensen engaged in a heated battle with teammate Noah Ping (No. 65 Velocity Racing Development Ligier JS F4), while the third step on the podium came down to a three-wide run to the checkered flag.

Christensen secured the pole position for Race 2 and got a good jump as the lights went out, but a five-car breakaway quickly formed to fight for the lead. As the race neared the halfway point, Christensen and Ping broke away to fight it out in their own battle for the lead, while Bryson Morris (No. 39 Crosslink Kiwi Motorsport Ligier JS F4), Lochie Hughes (No. 6 Jay Howard Driver Development / CSU One Cure / Lucas Oil / Pelican Ligier JS F4) and Alex Berg (No. 08 Doran-Kroll Competition Ligier JS F4) jockeyed for the third position.

Christensen and Ping traded positions at least three times with Ping leading briefly just past the mid-way point, but Christensen overtook him in Turn 1 to regain the lead while working their way to the white flag lap. The two continued side-by-side all the way through the Billy Mitchell Bend in Turn 13 on the final lap before Christensen ultimately crossed the finish line on his Hankook tires to secure the race win.

The battle for third, however, remained intense all the way to the finish line. As Berg, Hughes and Morris took the white flag in that order. They tussled back and forth with Hughes leading the pack off Turn 14, but raced side-by-side to the finish line with Hughes on the inside, Morris on the outside, and Berg pulling ahead in the middle to take the final step of the podium. As they crossed the line, only 0.083-seconds separated the three drivers. With Berg third, Hughes took fourth, followed by Morris in fifth.

“It was a really good race,” said Christensen following the race. “Me and Noah started to pull away; I saw the gap and knew that at the end it would be a fight for the win. Overall, it was just clean passes and a really fun race. I’d like to thank all the VRD guys. The car is obviously fast; we checked out on all the field. I’d like to thank my family for coming out and supporting me, and Noah for being a good teammate and having a clean race with me.”

F4 U.S. drivers have one more chance at victory as Race 3 goes lights out at 4:20 p.m. CT. A live feed of the Road America Jumbotron is available on SpeedTour TV’s YouTube page at YouTube.com/SpeedTourTV.