2021 has already been busy for Canada’s Rising Star as Clark was invited to be part of the RTI Official eSeries. Racing against highly experienced and professional drivers, Clark was able to finish the Champio 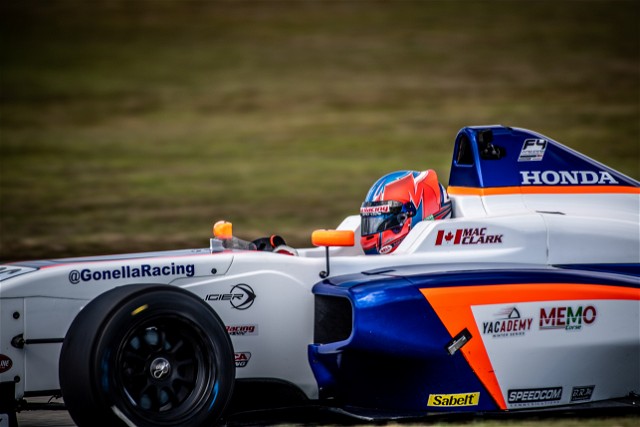 nship inside the top five as he was in the spotlight fighting for wins in all five rounds.

After a difficult 2020, with travel restrictions and a challenging year, Clark reports to be ready to pursue his dream of becoming one of Canada’s top drivers, as he follows the footsteps of his mentor and Speed Group co-founder, James Hinchliffe. His dream will start next week when he hits the ground at the first round of the F4 US Championship Powered by Honda, in Road Atlanta for Round 1. Gonella Racing, owned by Ernie Gonella, will join Clark's efforts in 2021. With over 35 years of experience in the field, Gonella knows racing from both the driving and engineering perspectives. He was born in Chicago, raised in Argentina, and later moved to Florida in 2002. Growing up in a racing family, he began working on his first race car at the age of 16.

Mac Clark - Official Speed Group Driver
"It is super exciting to take the next step in my career and join Gonella Racing for the 2021 F4US Championship. Ernie Gonella runs a first class operation, I am confident we have a winning car-team combination. Showing pace in preseason testing, we are working hard to be ready for round 1 at Michelin Raceway Road Atlanta. I’m looking forward to some awesome competition this year, we are going to have lots of fun."

Ernie Gonella – Team Owner
“After working with Mac, I was quickly impressed by his quality as a race car driver. He is very mature for his age and extremely dedicated. Our communication as a Driver/Engineer has been great since day one. He understands exactly what he needs from the car and how to give me feedback to make the car better. In my opinion, that is the most important factor to win championships. I’m excited about having Mac drive for my team in 2021 and even more excited for his future in racing.”