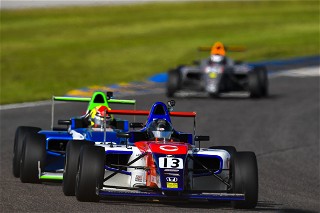 Gambling with tire strategy, Crosslink/Kiwi Motorsport rookie Spike Kohlbecker laid down a last-lap flyer of 1:34.917-seconds at Homestead-Miami Speedway on Saturday morning in the Formula 4 United States Championship Powered by Honda qualifying to claim his first pole-position start of the season.

"My strategy today was just to hit my marks, see what the weather was doing and how the track was reacting to the water," explained Kohlbecker. "I actually made a mistake on my last lap. It almost cost me. I went wide in Turn 2, got on the curb and got sideways. It was a great time and a real big thanks to the team."

A wet start to Saturday's qualifying meant teams had a decision to make ahead of the 30-minute session, start with Hankook wets or risk going out with slicks. With over night rains soaking the track, Homestead-Miami Speedway still had water collected in areas and F4 was first to hit the road course.

Most teams opted to start the session with rain tires, DEForce Racing's Nico Christodoulou was not one of those drivers. After the pace lap, Christodoulou pulled into the pits to switch from wets to slicks, never turning any official laps under wet tires. The Canadian rookie struggled with speed at first, but as the track dried and his tires came to temperature, Christodoulou jumped to the top of the time sheets, knocking championship points leader Hunter Yeany (Velocity Racing Development) off the point with four minutes remaining in the session (1:35.030-seconds).

Yeany started with wets, also made his switch early in the session, setting his quickest time (1:35.321-seconds) on Lap 5 equipped with Hankook slicks. The current points leader controlled the session until Christodoulou clicked off a lap .031-seconds faster than his personal best.

But, Christodoulou's time on top was shot lived as he was edged out by Kohlbecker by .113-seconds on the following lap. Christodoulou will start in Row 1 in second, his best starting position of the season.

"Heading out early in the session on slick tires helped us gain the tire temp we needed to hit the lap when it needed," Christodoulou said. "Not having to pit for dries really came into our advantage. This is my first time at Homestead, just like many tracks this season. I overall really like this track, it's got a good flow, and a great facility."

Equipped with wets, Kohlbecker stayed within reach of Yeany's time, but as he was just about to catch him, the Missouri native was called in to make the tire change, a call he said he was unsure of at first.

"I was a bit skeptical at first coming in and switching to dries," said Kohlbecker. "Eventually, halfway through the session, I knew it was the call to make."

Listening to the two-time F4 team champions paid off for Kohlbecker as his last-lap with slicks sealed his pole-position start.

Down on a cylinder, Dylan Tavella (Crosslink/Kiwi Motorsport) managed to lay down a 1:35.352-seconds lap that will have him starting in Row 2 alongside Yeany.

The top eight qualifying times were only separated by 0.881-seconds. (FULL RESULTS)

The F4 U.S. Championship drivers will take the green today at 12:50pm Eastern. Stream the race live on FanRacing.Live