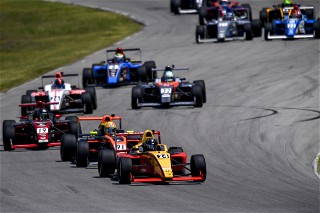 Group-A Racing drivers turned many heads this past weekend at Virginia International Raceway with its all-rookie lineup in the ultra-competitive Formula 4 United States Championship Powered by Honda. Drivers made tremendous progress from the season opener just two weeks ago to score 34 points and take home some hardware.

Race 1 of the weekend saw the boys putting on a clinic with clean efficient passes, making their way through the 33-car field to give a double-points result for the team. Nicholas Rivers qualified 10th but started 15th due to a driver penalty carrying over from Mid-Ohio. William Myers started 20th and Robert Torres in 32nd. The three drivers moved up a combined 33-positions with Rivers finishing fifth,  Myers seventh and Torres 22nd.

“It was a great double points result for the team,” said Team Manager Jonathan Scarallo. “Our whole squad is rookie drivers, and with a such a competitive field I am so impressed with how they handled the restarts and made the most of the green-flag track time given.”

Race 2 grid was set from the previous race's fastest lap, but with the drivers spending the race passing drivers, they never set a clear lap to grid them up front. Even with that they put on another clinic showcasing the speed in the Group-A Racing F4 machines.

The highlight of the race came with Rivers gained another 11 positions, charging from 13th to an incredible second place result, a very well hard earned podium result.

Myers was in yet another points-paying position when his race ended just before the checkered due to a right front puncture. Torres had moved up as well before he had contact ending his race with front end damage.

Race 3 was poised for yet another strong result for the Group-A Racing drivers until bad luck struck. Rivers was in position for another podium until contact with another driver forced him off track on the last lap. Unfortunate circumstances robbed the young driver of scoring his second podium result of the weekend.

Myers was in another strong points paying position in eighth when he unfortunately went off in the final corner. Damage from the excursion sadly ended his race prematurely. Meanwhile, Torres gained another eight positions in Race 3, rocketing from his  27th starting position to finish 18th.

“It’s easy as a competitor to not be satisfied, but I am beyond ecstatic with the performance of team and drivers this weekend,” stated Scarallo. “The progress the drivers made in such a short period of time from the first race two weeks ago to now is seriously massive. It’s a true testimony to the great coaching and driver development we offer for the drivers to make this massive step in a very short time. I can’t wait for Barber in just a week to see what they can do there after this weekend!”

The Group-A Racing drivers will look to carry its momentum into Barber Motorsports Park July 31st – August 2nd. Barber will present a new challenge and for the first time ever, will be a four race meeting instead of usual three.