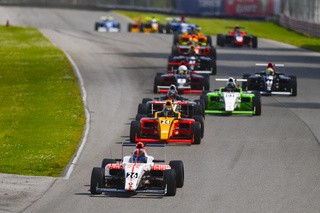 Lexington, OH. (June 27, 2020) – Honda Performance Development (HPD) is pleased to announce the extension of its agreement to be sole engine supplier to the FIA Formula Regional Americas and Formula 4 United States Championships, both Powered by Honda, through 2023. In combination with the recent announcement that Parella Motorsports Holdings (PMH) is taking ownership of commercial promotion for these series, the future is very bright for developing world class open-wheel racing talent in North America.

The FR Americas (FRA) Championship and F4 U.S. Championship offer global developing drivers the opportunity to demonstrate their skills on an international platform, with affordability and safety as top priorities. Both series’ cars are powered by equally strong, reliable, HPD-modified versions of the current Honda Civic® Type R® engine, with the FRA powered by a turbocharged 303-horsepower edition, while the F4 series uses a normally aspirated 160-bhp engine.

Honda and HPD have been involved with both series since their inception, and along with partners SCCA PRO Racing, Ligier and Hankook. This partnership has ensured that professional racing development opportunities are accessible and relevant to the largest number of young drivers in the world. In addition, with Honda’s longstanding involvement in pinnacle open-wheel series including INDYCAR, HPD is able to facilitate unique racing career opportunities – from karting through to INDYCAR – that only Honda can provide.

To reward success at the start of an open wheel career, HPD provides an HPD F4 Drivers’ Champion scholarship that assists the top finishing F4 driver advance to FRA competition. To continue this growth, HPD recently announced a path to Indy Lights with a Honda INDYCAR-aligned team for the FRA series champion. These awards, along with support from the series’ partners, have created a defined path for young racing talent around the world.

“We are eager to continue the strong momentum in developing racing talent in North America by leveraging our unique product and program capabilities,” said Ted Klaus, President of HPD. “I’d like to thank our partners SCCA Pro Racing, Ligier and Hankook for taking the risk with us, starting in 2015, to power the dreams of future INDYCAR stars.

“Our consistent, reliable, and powerful HPD-developed Type R® race engines have helped create affordable racing opportunities for developing open wheel racers, and we see even more opportunities with this new partnership. We’re excited that PMH has taken an active interest in helping aspiring professional racers achieve their goals ‘Powered by Honda’, and we’re excited to see what the future holds for these series and their participants.”

Both series kickoff their 2020 seasons this weekend at the Mid-Ohio Sports Car Course, with each series offering at least five more events this year and concluding at the Circuit of The Americas in Austin, Texas, as support events to the Formula One U.S. Grand Prix race weekend.

For more information, go to: https://hpd.honda.com/Motorsports/F3-F4