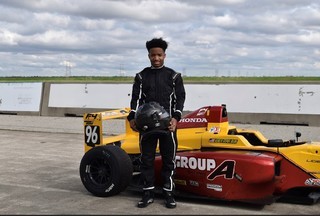 Group-A Racing is very happy to announce the signing of 16-year-old Long Island native Nicholas Rivers to its 2020 Formula 4 United States Championship Powered by Honda roster. Rivers is the team’s third 2020 driver announcement, with others pending.

“I am really excited about Nicholas being able to run with us in 2020” commented Group-A Racing team manager Jonathan Scarallo. “The relationship with he and his family goes way back with our operation and family so it’s very rewarding to finally see this come to fruition. He really shocked us at how quickly he came up to speed and how fast he went. We have been doing this so long that we can always closely predict the lap times the drivers will do based on their previous experience. Nicholas blew our estimated lap times for himself out of the water. On top of that, he was super pleasant out of the car, kept taking the coaching, asking questions, and applying everything he was taught to keep going quicker. I am really excited to see how much more he can develop this year.”

Like many drivers, Rivers got his start in racing competing at the karting level. He has entered a variety of races up and down the east coast in GearUp Series, locally at Oakland Valley Race Park and others. Competing with a modest father-son operation, made the next step in his career and development competing in F4 U.S. with Group-A Racing.

Rivers was born and raised on Long Island where Group-A Racing’s main shop is located. His first contact with the team came during the inaugural F4 U.S. season in 2016. Rivers family members were at the shop getting service from the team’s parent company; Auto Trend Tire & Wheel. As a 12-year-old at the time, Rivers got to sit in one of the teams’ cars, dreaming of the day he could go open wheel racing.

That day finally came four years later when Rivers finally got his first taste of the F4 U.S. equipment with Group-A Racing at MSR Houston in March. Despite his only car experience being in a race school, Rivers gave a  very impressive performance, blasting the initial goals and targets set for him.

“I am blessed and feel very fortunate to have this opportunity to compete in the F4US Championships with Group A Racing Team. I am feeling very secure and confident with the teams overall racing experience and guidance. Though this will be my debut in professional racing, I am excited to compete and ready to put the pedal to the medal.”

Group-A Racing has other opportunities in the F4 U.S. Championship along with its Driver Development program in the F4 feeder series, the Lucas Oil Formula Series. Drivers interested in test, race & development opportunities contact the team via 631-974-4379 info@GroupARacingTeam.com.