Capri Tools Partners with JHDD for the 2020 Racing Season 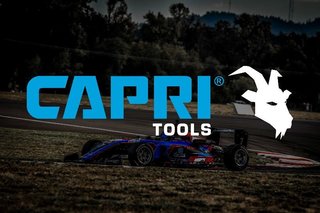 Jay Howard Driver Development (JHDD) is delighted to announce that Capri Tools has partnered with the team for the 2020 racing season.

Capri Tools supports the team with their top-of-the-line automotive tools that will allow JHDD to enhance their preparations for both their Cooper Tires USF2000 and F4 U.S. Championship teams, along with their Indy Lights Presented by Cooper Tires effort which will be on the grid full-time come the 2021 racing season.

“Capri Tools is proud to support the Jay Howard Driver Development team for their 2020 season by providing them with the tools they need for their journey,” commented Tatiana Mendez from Capri Tools’ Business Development Team. “We wish the team and all of their drivers the very best of luck for all the races this year.”

JHDD enjoyed a successful season in 2019, scoring three wins in its debut Road to Indy season, adding to the four victories they secured in the F4 U.S. Championship.  As the team continues to grow and fight at the front, team owner Jay Howard understands the importance of having partners who share similar values and add quality to the program.

“It’s an absolute pleasure being able to announce Capri Tools as a partner of our team,” noted Howard. “The tools they produce are second-to-none and will only make our race team better.  The details count for a lot in this sport, and when you are fighting for championships, the small details can prove to be the difference between winning and losing.  Capri Tools will only make us a better unit.”

JHDD, along with the support from Capri Tools, are set to get their seasons underway in the spring. F4 U.S. Championship begins at Michelin Raceway Road Atlanta, Georgia, April 9-11.