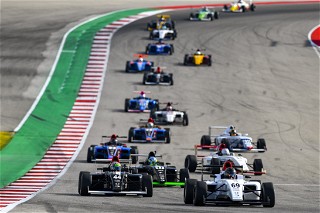 Building on the world-record breaking momentum from 2019, SCCA Pro Racing revealed today the five legendary circuits across the country that Formula 4 United States Championship Powered by Honda will visit in 2020.

The 17-round F4 U.S. calendar will include new and returning venues in 2020 with a Winter Warm Up scheduled January 13 at Palm Beach International Raceway for teams and drivers to test and experience series procedures before the first race of the season.

“SCCA Pro Racing is aiming to provide our teams with a variety of events and tracks that will help them develop successful drivers,” said Sydney Davis Yagel, General Manager of SCCA Pro Racing. “We hope the addition of a few new tracks will challenge the drivers and provide great racing for our fans.” 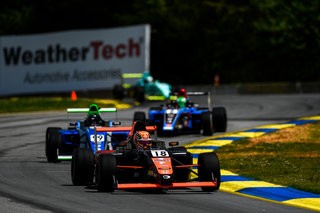 The official 2020 season will kick off for a three-round weekend on the tight turns and intense elevation changes of Road Atlanta April 9-11. The Championship will join F3 Americas, Formula Race Promotions and the Blue Marble Cocktails Radical Cup North America Series for a full weekend of open-wheel racing.

F4 U.S. breaks from racing in May to allow for drivers and crew members to attend the month-long Indianapolis 500 celebration. The action continues in June as teams make their way South to the Lone Star State for a three-round battle on the prestigious Circuit of The Americas June 5-7.

“As a young driver in a junior series I always wanted to race on the top tracks in world to gain circuit knowledge for the future,” explained F4 U.S. and F3 Americas Race Director Scott Goodyear. “In 2020 we have the opportunity to race on a F1 circuit twice which helps develop the craft of our young drivers behind the wheel. The June race will play an important role in prepping drivers and teams for the biggest race of the year when we join Formula 1 in October.”

The second half of the season starts with a schedule staple, The Andy Scriven Memorial at Virginia International Raceway July 17-19 that honors the late Andrew “Andy” Scriven, Ligier Automotive North America’s chief designer of the JS F4-16 and Ligier JS F3 chassis. 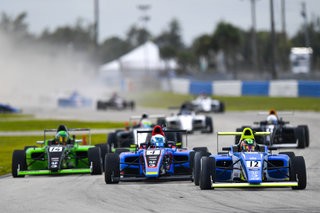 The Honda-powered series go from the Virginia rolling hills to the Alabama scenic circuit Barber Motorsports Park July 31-August 2. The visit to the 2.38-mile, 16-turn road course is a first for F4.

The final leg of the 2020 calendar starts September 25-27 at Sebring International Raceway, followed by the most anticipated race of the season, the Formula 1 United States Grand Prix at Circuit of The Americas in Austin, Texas, October 23-25.

“Our goal is to always pack our schedule with FIA-graded legendary raceways where not only our drivers will enjoy competing, but will also prepare them for their racing future as they ascend through the echelons of racing,” said Davis Yagel. “The 2020 schedule achieves that with a mix of street courses and iconic road courses.”

In effort to assist with team and driver budgets, the FIA-approved championship will travel with F3 Americas Championship Powered by Honda most of the season.

For more information on F4 U.S. or F3 Americas visit, F4USChampionship.com and F3Americas.com.

June 5-7: Circuit of the Americas with F3 Americas

October 23-25: United States Grand Prix at Circuit of the Americas with F1