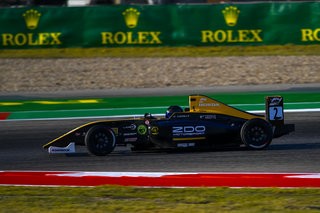 Bonilla made an impressive F4 U.S. debut in November competing in the series finale during the United States Grand Prix weekend at Circuit of the Americas, which featured two races on the same event weekend as Formula One. Following his strong performance, Jensen Global Advisors crafted an extensive off-season development program for Bonilla with the objective to challenge for race wins and a championship in the 2020 season.

F4 U.S. Championship is the first step in the ladder system to develop the best young race car drivers who aspire to ultimately compete in the Formula One World Championship.

The young Texan Bonilla stated "F4 U.S. Championship is the race series where the best young race car driver prospects in America are competing, with a world record 38 drivers entered in the recent races at the United States Grand Prix. So I am very excited to prove myself as a top prospect competing full-time in the F4 US series next summer, which will ideally lead to opportunities to have a professional career as a race car driver long-term."

To officially announce his 2020 racing program, Jake Bonilla will host a launch party on Thursday, December 12 in his hometown San Antonio, where the media and local sponsors can meet face-to-face with Bonilla and pose for photos with his 2020 F4 U.S. Ligier JS F4 championship race car.

For information about Jake Bonilla and to receive an invitation to his December 12th launch party, contact Eric Jensen via email at jensen@jensenga.com