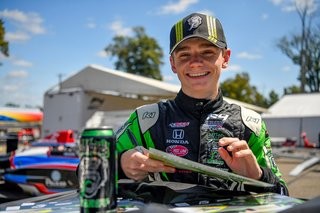 Points in round 11 don't outweigh a DNS in round 12

Heading to the Mid-Ohio Sports Car Course with a load of confidence, Alliance Racing Sponsored by Gas Monkey Energy driver Ryan MacDermid was hoping to continue his consistent, yet improving race results. As a rookie in the F4 United States Championship Powered by Honda season, the young Canadian has shown steady progression and car care, having made it to each and every checkered flag this season.

"Unfortunately, due to no fault of my own, our streak came to an end this weekend at Mid-Ohio," explained a dejected Ryan MacDermid. "I feel that that results wise, this was my worst weekend this season. We lacked a lot of speed and that hurt our qualifying, which essentially set the tone for the entire three days of racing. I am learning a lot this season and if I take anything away from this event, it is to keep my head high and keep working as hard as anyone."

After qualifying in the 14th position, MacDermid was battling in the points paying positions until the final circuit of the first racing action of the weekend. With fierce wheel-to-wheel battles happening throughout the event weekend, MacDermid and a fellow competitor were fighting for the same piece of real estate and something had to give. When the final checkered flag flew for round ten, MacDermid found himself in P18.

With lap times from the first race of the weekend setting the grid for race two, MacDermid lined up inside row seven and was confident in being provided a fighting chance to move forward.

"It was a good race for myself as I was able to gain a few results through speed, and some more through attrition," added MacDermid, who eventually finished in the eighth position. "Gaining points in round eleven has ensured that I have received at least one championship point every race weekend of my rookie season to date."

With a strong run and clear of some slower drivers, MacDermid's pace quickened yet again, and he was able to turn the tenth fastest lap time. Providing him with an outside row five starting position, the young Canadian would look to attack during the final wheel-to-wheel action of the weekend.

Set to take place on Saturday morning, MacDermid arrived at the facility and was ready to race. Feeling more confident as the weekend went on, the confidence was quickly shattered when the Alliance Racing team found an issue with his #16 machine.

MacDermid continued, "Upon warmup, the car died and would not restart. The crew worked feverishly to change the battery and diagnose any problems. After a few changes, the car started and it looked as if we would be good to go but when I went to leave the grid, the same thing happened again. Very disappointing."

With more than a month before the next F4 United States Championship Powered by Honda event, MacDermid will have to sit and wait until the middle of September for his next shot at a victory. Set to take place at the bumpy and challenging Sebring International Raceway, Ryan hopes he could put the #16 machine on the podium over the September 13-15 weekend.

Ryan MacDermid would like to thank Gas Monkey Energy, Alliance Racing, K1 Racegear, and Lisa Fayle Real Estate for their continued support. For information on Ryan MacDermid, please visit him online via his social media channels by searching Ryan MacDermid Motorsports on Facebook, Instagram and Twitter.