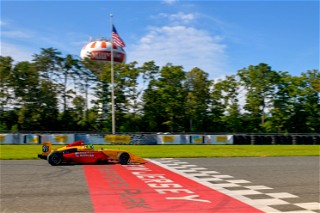 After being out of a car completely for three years, Porcelli joined Group-A last September in a one-off drive at the F4 NJMP event. Despite competing in one of the most competitive series and being out of a car for so long, Porcelli showed tremendous progress each session during the event. Constantly working with team lead engineer Alain Clarinval and driver coach Jonathan Scarallo, the New Jersey native soaked everything in to improve. When the checkered flag flew at the end of the weekend Porcelli earned an eighth-place result.

“Since my stellar rookie performance in 2018 at NJMP with Group-A-Racing I have been working nonstop to get back into the car for Round 1 at Road Atlanta” stated Porcelli. “I have raced on Road Atlanta more than any other track and I have multiple podiums and wins under my belt. Now that I have had some experience in the F4 U.S. car powered by Honda and working with Group-A-Racing I am very excited to see what we can do when we join the pace race from the start of the season. We have placed ourselves in a position to contend for the  Formula 4 United States championship. I truly believe that Group-A-Racing is the optimal fit for myself as a driver. All my hard work to get back on track over the past two years is finally paying off and I can’t wait to see what we can do together as a team.”

Porcelli continued to work hard with Group-A Racing team in the off season, obtaining funding from new and returning sponsors to return to the team in F4. Porcelli will drive the No. 93 Group-A Racing/Brain Forest Enhancement Training/New Life Independent Distributor/RaceCraft1/Turnkey/Stuffed Burger Ligier JS F4 car.

“Having David back with us puts a big smile on my face” said Group-A Racing manager Jonathan Scarallo. “Whenever a driver returns to your program it’s a big compliment to show the type of program we run. On top of that, I have known David and been working with him for years. It was already great to have a good result in a one-off last year, now to having him back for more events is incredibly rewarding. It’s come together a bit late with no pre-season testing for him, but we will all be working very hard together to catch up quickly.”

Group-A Racing has another seat available for testing and part time/one-off race programs. Interested parties contact the team via 631-974-4379 info@GroupARacingTeam.com