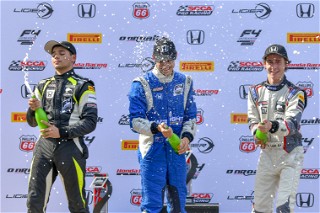 In Rounds 8-10, JHDD broke the series record for the most points ever scored by a team at a single event, just to be eclipsed by Crosslink/Kiwi at Pittsburgh who topped the IndyCar driver’s team record, collecting the first ever podium sweep by a single team, accompanied by two additional wins and another second-place finish. The two sophomore-year squads have paddled the top spot back and forth after each match, this time with Crosslink/Kiwi recovering from a 79-point deficit. The Texas-based team now leads by 11 heading into the penultimate event at New Jersey Motorsports Park Sept. 14-16.

“They’re coming into it. They’ve been practicing all year, and this was their time. They did an amazing job,” said Crosslink/Kiwi Motorsport co-team owner Teena Larsen following the team’s podium sweep at PITT Race. “I just want to thank the whole Crosslink/Kiwi Motorsport team. They just worked so well together. We did it. We are on the podium: three wins and tons of podiums.”

Although DC Autosport with Cape Motorsports missed the podium for the first time this season at PITT Race, it still locked in three top-10 finishes from its points leader Dakota Dickerson of San Diego to maintain its third-place standing over Global Racing Group. DEForce Racing, who has been a single car team for most of the season, continued to make gains, adding another car to its roster for the season. Both drivers, combined, added points to the sophomore team’s results in all three rounds.

Alliance Racing and Skip Barber Momentum F4 edged their way into the team championship race, tallying their first points of the season on the board. Miller Vinatieri Motorsports and Group-A Racing also scored valuable points at the fourth F4 U.S. event.

Team Championship points are calculated from teams’ top-two drivers’ standings from each individual race. In case of a tie, the team with the most race wins will be awarded the higher position.

The F4 U.S. Championship returns to New Jersey Motorsports Park for the first time since its inaugural season with F3 Americas Championship and Formula Race Promotions. Advanced discounted tickets to the event and a full list of standings can be found at F4USChampionship.com.

Team Standings after Round 12