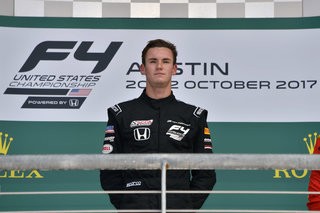 Kyle Kirkwood of Jupiter, Florida, reminded the world why he is the  2017 Formula 4 United States Championship Powered by Honda national champion after winning his ninth race of the season practically uncontested in the second half of the F4 U.S. season finale race at the Circuit of the Americas United States Grand Prix Sunday. The win tied the series record held by inaugural champion Cameron Das of Baltimore.

“It’s a surreal feeling being on the top step of the F1 podium,” Kirkwood said. “Taking that parade lap with thousands of fans cheering, confirms even more, this is what I want to do for the rest of my life. Thank you F1 for allowing us to share this awesome experience with you.”

Dakota Dickerson of San Diego captured his second podium of the weekend, which gave him just enough points to claim third place in the national points championship, and Braden Eves of Gahanna, Ohio, was awarded third place after Skylar Robinson of Augusta, Georgia, received a 20-second penalty for exceeding track during the session.

“It’s disappointing to have such a great race and have the podium ripped away from me,” Robinson said. “I went around a lapped car, which didn’t give me an advantage in the race. The other situation, the car was slower than me but he was leading me at the time, and I shouldn’t have passed the way I did. It was a hard lesson to learn. My Momentum Motorsports team worked really hard this weekend to give me a fast car and I really wish that I could have brought this home for them.”

Early morning weather created uneven track conditions for the finale, causing the series officials to declare a wet race. All teams were required to use Pirelli P’Zero wet tires, however, some teams gambled by starting from the pits to switch to slicks. While the cars with slicks were faster, the shortened race time and lack of yellows made it nearly impossible for those cars to catch the front of the field. Austin Kaszuba of Burleson, Texas, who gave up a 10th-place grid position to switch tires in pit lane at the start, clocked the fastest-lap of the race at 2:19.158.

Benjamin Pedersen of Copenhagen, Denmark, started on pole with Kirkwood’s freshly wrapped Bell Helmet black 8-ball car starting beside him. As the lights turned green, Pedersen experienced tire spin from the amount of water that collected on his 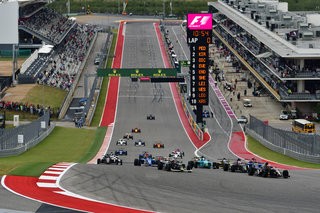 side of the track which allowed Kirkwood to get a great jump on the start and second-row starters Dickerson and Eves to challenge the Global Racing Group pilot into Turn 1. Pedersen lost the battle to Dickerson in Lap 1 but was able to hold Eves until lapped traffic in the tight COTA turns compromised Pedersen’s strategy later in the race, allowing Eves to pass. Pedersen gained some of his momentum back, but the drying track paired with wet tires did not permit the speed he had seen the rest of the weekend. Pedersen finished the race 10th.

Dickerson challenged Kirkwood for the first half of the race but poor tire management caused him to lose momentum. The Kiwi Motorsport driver switched strategies from attack mode into survival mode to hold off Eves, Pedersen and Robinson. Robinson, who excels in wet conditions, started the race 15th and started picking off competitors one by one until he was at the front of the field. A beautiful pass in the Esses on Eves for third left fans cheering and even competing teams clapping on his success. Unfortunately, celebrations ended after the issued penalty knocked Robinson to eighth place in final results. JDX Racing pilot Ben Waddell of Denver also experienced a great weekend of racing which resulted in the JRi Hard Charger Award after making 21 progressive position changes in two races.

While Kirkwood clinched the national championship before the weekend finale, second and third place were not decided until the checkered flag dropped in the final round on Sunday. Raphael Forcier of Montreal won the F4 U.S. Championship runner-up title and Dickerson, in just 11 rounds of racing, swooped in to claim third in the national points championship. The top-seven drivers (Kirkwood, Forcier, Dickerson, Pedersen, Jordan Sherratt of Durban, South, Africa, Eves and Timo Reger of Houston) are presented with FIA Super License points to aid in their racing career advancement to Formula 1. F4 U.S. Championship is the only junior racing series, as of 2017, in the United States to offer its competitors Super License points.

The F4 U.S. Championship 2018 season kicks off the last weekend in April with Pirelli World Challenge and the new F3 Americas at Virginia International Raceway. Fans can view full results from the weekend at F4USChampionship.com.