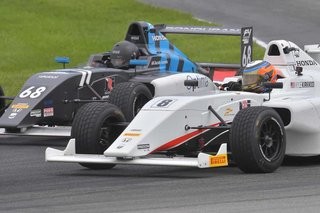 Fierce, close racing has become a hallmark of the 2017 Formula 4 United States Championship Powered by Honda, and the final mid-season round at Mid-Ohio Sports Car Course in Lexington, Ohio, lived up to expectation. In a tight battle with Brendon Leitch of Invercargill, New Zealand, Kyle Kirkwood of Jupiter, Florida, pulled away on the final lap to go flag-to-flag in first place. The win marked the seventh victory for Kirkwood this season.

Leitch visited the podium for the third time this weekend, placing second in Race 3, and Justin Sirgany of Kingston, Jamaica, captured his first podium to complete the top-three.

“It was great to finish the weekend with a win,” said Kirkwood, who placed second and seventh during Rounds 9-10 on Friday. “I had a lot of fun racing against Brendon. He didn’t make it easy for me though, and kept me on my toes most of the race. I enjoy that type of competition. It makes me a better driver.”

Kirkwood started on pole next to Skylar Robinson of Augusta, Texas. Leitch, who was third on the grid, was quick on the start to challenge Robinson on the inside of Turn 1. The Kiwi Motorsport pilot successfully cleared the No. 2 Momentum Motorsports car of Robinson to take P2. Robinson held off third-row starters Raphael Foricer of Montreal and Justin Sirgany of Kingston, Jamaica, until a full-course yellow on Lap 3 closed the gap. John Paul Southern Jr. of Westlake, Ohio brought out the yellow after going sideways to avoid a spinning Steve Bamford of Toronto. Bamford continued the race, and Southern’s race-day ended.

Kirkwood got a good jump on Leitch on the restart, but Leitch charged hard, catching Kirkwood in the braking zones. Drafting off Kirkwood, Leitch went wide to pass, but Kirkwood’s No. 8 Cape Motorsports car carried more speed in the turns, allowing Kirkwood to pull away. In the last lap of Race 3, Kirkwood broke the Mid-Ohio F4 U.S. track record held by Konrad Czaczyk of Jupiter, Florida, laying down a 1:25.737.

Behind Kirkwood and Leitch, Robinson and Sirgany had their own battle brewing. Off the restart, Robinson defended his 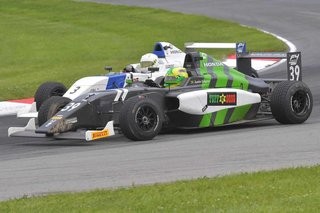 racing line heading into the Keyhole. Sirgany caught the Momentum Motorsports driver on the outside of Turn 4. Robinson squeezed Sirgany to the edge of the track, but the Global Racing Group rookie edged Robinson out to take over the final podium position.

“I am really excited to get my first podium finish. I want to carry the momentum from today to the next rounds,” Sirgany said. “From Homestead to now, I’ve gotten more mature as a driver. My judgement and decision making has also improved. I would like to thank my parents, GRG and my sponsors, the Bob Marley Foundation, for always supporting me.”

The F4 U.S. drivers return to action in two weeks at Virginia International Raceway Aug. 25-27 with the largest expected field of the season.