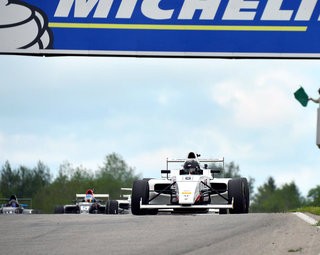 Forcier and Jacob Loomis of Fort Worth, Texas, joined Kirkwood on the podium.

"Our momentum carried over from Indy,” Kirkwood said. “CTMP is an extremely fast and technical track. It really tested my skills. I am ecstatic about being first in the championship. I didn’t expect it to happen so early in the season.”

Starting on the inside of Row 2, Kirkwood was aggressive right as the green flag dropped. Kirkwood positioned himself on the inside of front row-starter McCusker in Turn 1, going nose-to-nose into Turn 2. The Cape Motorsports pilot gained more speed exiting the turn which allowed him to overtake McCusker. Dickerson defended his P1 position from Kirkwood, but Kirkwood would capitalize on a tight inside pass in Turn 5b to take a minor lead.

The trio battled for position throughout the next few turns, creating a monster draft for the No. 62 Indy Motorsport Group car of Forcier to catch them on the straight. Kirkwood swung wide to the outside of Dickerson, leaving room for McCusker to position himself on the inside of the series newcomer. Forcier edged his way into the mix on the outside of Kirkwood, creating a four-wide battle for first. Dickerson would brake going into Turn 8, allowing Kirkwood to pull away for the lead. Forcier seized the opportunity and dipped down to the inside to take P2. Dickerson dropped to third with McCusker in fourth.

The front-field battle was interrupted by a yellow flag caused by an uncontested incident that left Vincent Khristov of Delray Beach, Florida, in the wall. On the restart, Kirkwood started to pull away.

Another full-course yellow appeared that abbreviated the session after Kent Vaccaro of Plattsburgh, New York, collided with the tire wall swerving to avoid contact with Toronto native Steve Bamford who spun in Turn 1. The extended clean-up left two minutes on the race clock.

On the last lap, McCusker would oversteer his black No. 5 Primus Racing machine, causing him to go off track. Global Racing Group driver Loomis stole the last podium spot from Dickerson after the Kiwi Motorsport pilot bobbled on the final turn.

Kirkwood will start on pole for Race 2 with Dickerson completing the front row.

The F4 U.S. cars take the track again on Sunday for the final two rounds of its international debut at CTMP. Fans can watch live timing and scoring for the event at F4USChampionship.com.