Noah Ping Wins Another Race at the Circuit of the Americas 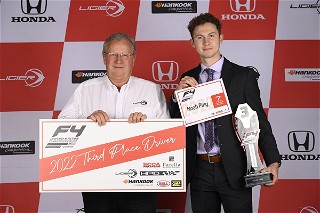 November 9, 2022 – With a shot at the F4 United States Championship Powered by Honda championship, VRD Racing driver Noah Ping descended on Austin, Texas for the final three races of the season. Set to battle the famed Circuit of the Americas, Ping was up for the challenge and excited about the opportunity. When the weekend ended, Ping showed speed in both the wet and dry weather racing, added a win to his resume but came up just short in his quest for the title.

After a quick morning Wednesday that saw a test session followed by a single practice session, Noah Ping entered qualifying looking for the pole position and inside front row starting spot for the first race on Thursday. Clocking the fourth fastest lap time, .628 behind the eventual pole position winner, Ping earned the fourth fastest lap of the session and started race one from the outside of row two.

Returning to the track Thursday morning with winning on his mind, Ping did just that by topping the results sheets in the first race. Claiming the win by .244 over his teammates, Ping, Jacob Loomis and Ethan Barker made it a one-two-three finish for VRD Racing. Scoring the maximum 25 points available with his rivals hovering around the top-five, Ping clawed his way back to be firmly engaged in the championship battle.

Race two was a blow in Ping’s championship hopes as a fellow competitor struck Ping in the famed esses on lap six which forced him to retire his VRD Racing machine and put him out of the race. Scoring no points while his rivals were at the front of the field, Ping would look for a miracle in the final race of the season on Friday.

With rain falling in the early hours of Friday morning, a damp track greeted racers. With officials deeming the final event of the year a wet race, F4 drivers fixed Hankook wet weather tires to their cars and headed out on track. With substantially slower lap times due to the rain, the race distance was only a total of seven laps and Noah would close his season in 16th while scoring the third-fastest race lap.

“It was great to come into the weekend with a shot at the title,” explained Ping. “We managed to win a race and show speed in both wet and dry weather but had some bad luck in race two which put us behind. In the end, it was a good season for me and 2023 starts now.”

Next up for Noah Ping will be the continuation of his off-season test program as he prepares for the 2023 race season. Stay tuned for more details coming soon.

Be sure to follow Ping Racing on social media by searching ‘Ping Racing’ to stay updated on news, information, photos, and results.