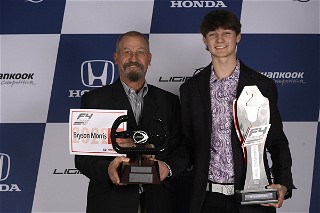 November 7, 2022 – It was the final event weekend on the 2022 F4 United States Championship Powered by Honda calendar and one that Bryson Morris had worked hard for all season long. Entering the weekend second in the championship point battle, Morris had three chances to gain seven points on his rivals to earn the elusive title.

Starting with practice on Wednesday, two sessions were put in the record books before the important timed session that would set the grid rolled to the track that afternoon. It was a valiant effort in qualifying for Morris as a solid lap slotted him third on the grid, a scant .135 in arrears of the pole position winner. In contention for the series title and in the battle for the race win, Morris started the first wheel-to-wheel action Thursday from the inside of row two.

Holding his position through race one and crossing the line in third, Morris was the victim of another team's speed as he fell behind one of his championship protagonists. Standing on the podium in third, Bryson garnered another podium result and kept his name in the fight for the championship with two races remaining. Morris again strengthened his position in the title chase in race two as he was once again on the podium, this time in P2. Finishing less than a second behind the race leader, Morris added 18 championship points to his season-long total and would race for the title on Friday.

Following the completion of Thursday’s on-track activity, Morris was hit with time penalties in both races dropping him to sixth in race one and seventh in race two.

“I did not think that I did anything wrong on track,” expressed Morris. “Both penalties are for track limit violations, but it was never done in a way to gain an advantage. With the results official, I am now out of the championship race but will be pushing hard for a race win tomorrow.”

The season would end in heartbreak for Morris as he was forced to retire only four laps into the eighteenth and final race of the year after being hit from behind in turn eleven which bent the rear suspension. Deemed as a wet weather race prior to the start of rain that fell overnight, Morris was hoping to battle for the win but fell out of contention with a damaged car.

Morris added, “A huge thanks to Crosslink Kiwi Motorsport and all my 2022 partners. Despite not winning the title, it was a great year, and I will remember every win and podium result. It was a special season for me.”

Stay tuned for 2023 news from Bryson Morris Racing in the very near future.

Stay tuned to the Bryson Morris Racing social media pages for news, information, photos, and results from the event weekend. For more information on Bryson Morris, please visit him online at www.BrysonMorrisRacing.com.