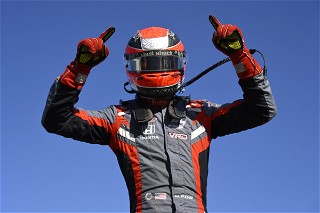 As the field worked their way through the uphill esses on the same lap, the championship battle took a dramatic turn as Morris lost control of his Ligier JS F4 and backed into a tire barrier, which brought an early end to his day.

As they crossed the finish line, Ping was scored first, followed by Hughes in second, and Andre Castro (No. 8 Future Star Racing Ligier JS F4) in third.

“It was a bit chaotic,” said Ping after climbing from his car. “We were warned in our drivers meeting to take it safe this morning. After the safety car, there was some oil out on the track; I spun my tires when we went full-course yellow. It was right on line, so you almost had to run the wet line. The cold weather didn’t help, either. There were a lot of variables out there.”

For his efforts enduring a tough weekend at the Mission Foods VIR SpeedTour, Alex Berg was awarded the Omologato Perfectly-Timed Move of the Race at the Andy Scriven Memorial. After climbing from a 19th-place starting position in Race 3, Berg crossed the finish line fifth and was presented with a bespoke Omologato timepiece embossed with F4 U.S. branding during the podium celebrations.

A full run-down of the official results from Race 3 are available, here.

F4 U.S. will return to the track for their final round of the 2022 season at Circuit of The Americas next month. Contested November 3-5, tickets for Mission Foods Austin SpeedTour are available now at SpeedTour.net. Follow along for all the latest F4 U.S. news on Facebook, Instagram and Twitter, or visit f4uschampionship.com.