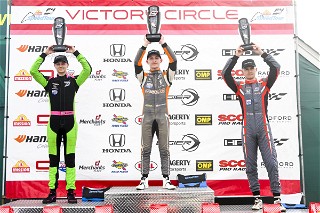 ALTON, Va. (October 8, 2022) – Ryan Shehan made a last-lap pass to take the victory in Race 1 for Formula 4 United States Championship Powered by Honda (F4 U.S.) during the Andy Scriven Memorial weekend at Mission Foods VIR SpeedTour. The victory marked Shehan’s second victory in the No. 66 Crosslink Kiwi Motorsport Ligier JS F4, and the second-consecutive event that he’s kicked off the weekend with a win.

“I honestly didn’t know that was the last lap,” said Shehan following the checkered flag.  “We had the restart and I had stayed in second, but then I got a really good draft on the backstraight and I made the move. It was a bit of a hectic race, but I’m glad to come out on top.”

Shehan’s Crosslink Kiwi Motorsport teammate, Bryson Morris (No. 39 Crosslink Kiwi Motorsport Ligier JS F4), led the field to green in a rolling start after a few competitors ran into trouble on the formation laps with cold tires on a brisk morning. With a solid run toward the green flag, Morris jumped out to the lead as the field made their way to Turn 1. By Turn 12, the championship points leader ran into trouble as Lochie Hughes (No. 6 JHDD / CSU One Cure / Lucas Oil / Pelican Ligier JS F4) suffered a broken rear suspension during contact to bring out a full-course caution.

Morris, who entered the weekend second in points, once again jumped to the lead as the green flag waved to restart the race with just a few minutes left on the clock. With Shehan trailing close behind, he was able to get a good draft and a solid run on his Hankook tires to overtake Morris coming down the backstretch, taking both the lead and the checkered flag.

F4 U.S. returns to the track today at 1:20 p.m. ET to contest Race 2 of the Andy Scriven Memorial at the Mission Foods VIR SpeedTour. Before the lights go out for the race, fans are invited to the Grid in the North Paddock for a special pre-race fan walk honoring the late Andy Scriven. Scriven was the chief designer for Ligier Automotive North America, designing both the Ligier JS F4-16 and the Ligier JS F3.