Get to know Bryson Morris in 10 Questions 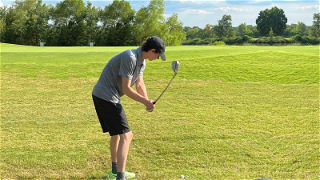 What topping absolutely never belongs on a pizza?

Bryson Morris (BM): “That’s a tough question—I was not expecting to be asked that. Probably vegetables.”

Do you believe in luck?

What emotions do you go through during a race?

BM: “Probably the biggest one for me is anger—at myself, sometimes.”

If you were developing the next big social media platform, what would it be used for?

BM: “Oh my gosh. All of the platforms are the same. I really don’t know. Maybe more could be done with one that has videos to inform people on different topics—something like that.” How did you come up with your autograph?

BM: “My autograph is just the first letter of my first name and the first letter of my last name. It’s pretty easy to do. It’s been so long since I came up with it that I don’t remember exactly when it was—maybe it was in third grade? We were practicing how to write our names in cursive and I just tried writing the ‘BM’ once and I liked it.”

How do you decompress after a tough race?

BM: “A cold shower and a cold bottle of water.”

If you didn’t drive racecars for a living, what would you do?

BM: “Maybe I’d be a Twitch streamer or something like that. I think it’d be cool.”

Who in the paddock have you known the longest and how did you meet?

BM: “Probably Matt Christensen. We met karting—he was always at the kart races that I was at, and we eventually got to know each other and became friends. We used to talk more than we do now, but I think that’s who I’ve known the longest. It’s either him or [Ryan] Shehan.”

BM: “It’s definitely similar, but the training is different. You need to train a bit more for the endurance races. The F4 races are harder physically for the first 20 minutes, but they’re only 25 or 30 minutes. The GT stuff is less physical, but it’s really big on the mental aspect. You don’t get as much sleep, and you have to stay really focused the whole time. You need to train more for those events mentally, too.”

Last week I talked to Lochie Hughes and I asked him for a question to ask you. He said to ask, what’s it like driving for a team full of Kiwis. Were there cultural differences at the beginning?

BM: “Not really. I’d say the hardest thing to get used to is the accents and some of the words they use. Trying to figure out what they mean, and learning some of the words—that was a different challenge than I’ve had before.”

How have you learned each other’s lingo – is it just talking on the radio, during debriefs, or have you actually sat down and worked on figuring it out?

BM: “Just talking to them after each session. They’ll use some random word and I’ll ask ‘what does that even mean?’ Then they’ll explain it. It’s one of those things where it just happens naturally. It’s not anything that I learned them all at once, it’s been over time—I understand them a lot better now.”

Do you have a question that I can ask the next driver I interview? It will be Noah Ping.

BM: “What's your favorite car that you have driven and why?”