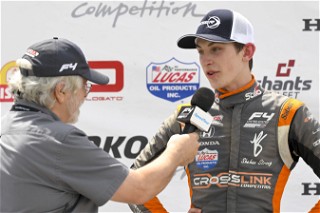 MILLVILLE, N.J. (July 30, 2022) – It was a tight race for the drivers competing in Formula 4 United States Championship Powered by Honda’s Race 1 at New Jersey Motorsports Park (NJMP) on Saturday afternoon. In fact, it was the closest finish of the year with just 0.038-seconds separating the top-two drivers as they crossed the line on their Hankook Tires. Lochie Hughes crossed the line first in his No. 6 Jay Howard Driver Development (JHDD) / CSU One Cure / Lucas Oil / Pelican Ligier JS F4, but it was Ryan Shehan in the No. 66 Crosslink Kiwi Motorsports Ligier JS F4 who was declared the winner following a stewards’ decision after the race. The result marked Shehan’s first career F4 U.S. win.

Lochie Hughes secured the pole for Race 1 during Saturday morning’s qualifying session. The 20-year-old Australian got a clean start and jumped away to lead the field. Breaking away with him were Shehan and Bryson Morris (No. 39 Crosslink Kiwi Motorsport Ligier JS F4). While the three raced closely throughout the entire 30 minutes—they were still within a second of each other as the race passed the halfway point—their positions on track never changed despite Shehan’s repeated attempts at a pass.

Noah Ping (No. 65 Velocity Racing Development Ligier JS F4) and Gabriel Fonseca (No. 76 Crosslink Kiwi Motorsport Ligier JS F4) spent most of the race running fourth and fifth, respectively, but contact between the two on lap 15 led to a full-course yellow and their retirement from the race. Race director, Scott Goodyear, called for a red flag during cleanup, which allowed the field to restack for a five-minute shootout. 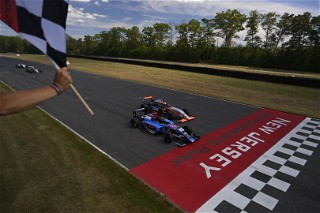 As Hughes led the field to the green, it was determined by stewards that he accelerated too soon, thus making a false start and resulting in a five-second penalty issued retroactively after the race.

F4 U.S. returns to the track tomorrow for Race 2 at 9:30 a.m. ET, followed by Race 3 at 1:40 p.m. ET. Spectators are invited to join the F4 U.S. drivers on the pre-grid for a fan walk at 1:10 p.m., prior to the series’ final race of the weekend. For updates throughout the weekend, follow F4 U.S. on Facebook, Instagram and Twitter for updates, or use Race Monitor to follow live timing and scoring.