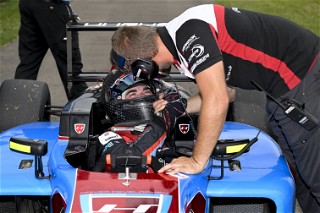 INDIANAPOLIS (July 22, 2022) – The battle for the driver’s championship has been fierce in the Formula 4 United States Championship Powered by Honda (F4 U.S.). The series has seen five different winners in the first nine events and will enter the second half of the season when they arrive at New Jersey Motorsport Park next weekend.

With a scholarship on the line to compete in the Formula Regional Americas Championship Powered by Honda 2023 season, only 25 points separate the top four drivers, and less than one weekend’s point value separates the top seven drivers. The key to success in the F4 U.S. championship will be consistency, as each driver has failed to score points in at least one race this season. Who takes home the trophy—and a scholarship—will be determined by who best minimizes the effect of misfortune. Noah Ping sits third in the point standings, followed by his Velocity Racing Development teammate, Matt Christensen, in fourth. Each with two wins and two second-place finishes, Ping leads his teammate in podium finishes with a third-place result from NOLA. Only six points separate Ping from second-place Morris, and Christensen sits only 13 points behind Ping. All-in-all, both drivers are within 25 points—or one race—of the points lead. Doran-Kroll Competition’s Alex Berg currently sits fifth in the point standings, just 55 points out of the lead. The 15-year-old has a best finish of third this season, recording it in three consecutive races across the NOLA and Road America weekends. Berg also secured his first F4 U.S. pole while racing the No. 08 Doran-Kroll Competition Ligier JS F4 in Mid-Ohio last month.

Just three points behind Berg is Ryan Shehan. Shehan is still looking for his first win this season, but has used his Hankook Tires to record a runner-up finish and two third-place results in his No. 66 Crosslink Kiwi Motorsport Ligier JS F4.

After securing a win at NOLA and a third-place result at Road America, Nicholas Rivers is still ranked seventh in the standings, despite missing Mid-Ohio due to lack of sponsorship. With three teams represented by the top three drivers, the battle for the team points championship is also fierce. With five wins and 11 podiums, Velocity Racing Development (VRD) currently leads the charge. The organization has entered three different drivers in F4 U.S. competition this season, and all three have made it to victory lane. Additionally, the team achieved a podium sweep with their three drivers at Road America.

With six drivers in their stable, Crosslink Kiwi Motorsport is putting up a good fight. The team currently sits just 51 points behind VRD with two wins and seven podiums.

F4 U.S. returns to the track for rounds 10, 11 and 12 at New Jersey Motorsports Park, July 29-31. The series will join the Formula Regional Americas Championship Powered by Honda and Sportscar Vintage Racing Association for an action-packed weekend at the New Jersey SpeedTour. Spectator gates will be open Friday through Sunday, with tickets available at the gate or online at NJMP.com/SpeedTour.

About Formula Regional Americas Championship & Formula 4 United States Championship, Powered by Honda: The FIA-certified Formula 4 United States Championship & Formula Regional Americas Championship are designed as entry-level open-wheel racing series offering young talent the opportunity to demonstrate their skills on an international platform while keeping affordability and safety as key elements. The Championships align with the global FIA development ladder philosophy of using common components to provide a cost-efficient, reliable and powerful racing structure as drivers ascend through the levels on their way to U.S. or global racing success.