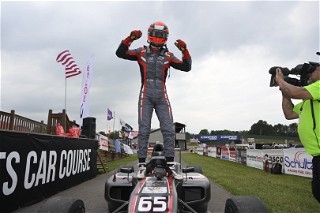 LEXINGTON, Ohio (June 26, 2022) – Noah Ping, driver of the No. 65 Velocity Racing Development Ligier JS F4, scored his second win of the season in the final race of the weekend at Mid-Ohio Sports Car Course. It was a hard-fought win for the 20-year-old from Buford, Ga., who had to fight for the point position, not once, but twice, in order to take the victory.

Starting in the second position, Ping held it two-wide with polesitter Lochie Hughes (No. 6 Jay Howard Driver Development / CSU One Cure / Lucas Oil / Pelican Ligier JS F4) all the way to Turn 4, where Hughes got out of shape and spun through the grass, leaving Ping to take the lead. With Hughes out of the battle, Ping led Bryson Morris (No. 39 Crosslink Kiwi Motorsport Ligier JS F4) and Ryan Shehan (No. 66 Crosslink Kiwi Motorsport Ligier JS F4) throughout the opening laps, with less than two seconds separating the three drivers.

In the middle of the race, Morris was able to overtake Ping to lead the field for seven laps. However, Ping never let Morris open a measurable gap, and was able to regain the lead with less than three minutes remaining in the event. Ping was able to not only hold on, but also put some space between himself and Morris to prevent a last-lap pass.

“It was an up and down race—a bit crazy,” said Ping after climbing from the car. “I don’t know what happened to Lochie [Hughes] at the start, but I think he lost it. We made a little bit of contact when he spun back on to the track, but luckily the car is okay. When Bryson got by me, I think I was a little bit in my head because of the contact. It actually ended up getting a little wet in the Keyhole when I got the pass, so he ended up out-braking himself in the wet. I waited for the car and then got back to power and was able to pass him on the inside.”

The result marked Ping’s second victory of the season—with his first coming at NOLA Motorsports Park back in April. For Morris, it completed a podium trifecta, gathering a first, second, and third-place finish across the weekend.

A full run-down of the provisional results from Race 3 are available, here.

F4 U.S. returns to the track next month for the New Jersey SpeedTour at New Jersey Motorsports Park, July 29-31. Tickets for the event are available now at NJMP.com/SpeedTour. Fans can replay the live stream of today’s races on SpeedTour TV’s YouTube page at YouTube.com/SpeedTourTV.