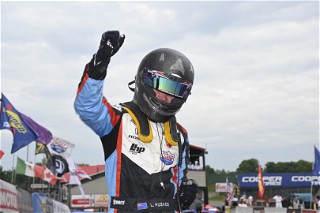 First-time polesitter Alex Berg (No. 08 Doran-Kroll Competition Ligier JS F4) faced a tough battle from second-place Ryan Shehan (No. 66 Crosslink Kiwi Motorsports Ligier JS F4). The two raced side-by-side for two and a half laps before making contact in Turn 5 and opening up the door to their competitors.

Meanwhile, Hughes had already begun his charge through the field. The 20-year-old driver took it three-wide through the Keyhole to move up to fourth on lap 2, and continued to make bold moves to pick up positions throughout the race. He moved into third as Shehan and Berg made contact in Turn 5 on lap 3, and then pulled into second as he worked through the carousel on the same lap. In just four laps, Hughes completed his charge to the front, overtaking Berg in the Keyhole to take the point position.

“The first couple laps, everyone was really close, so whenever a gap opened up, I just put the car there,” said Hughes in Victory Lane. “We made our way up to third, and then the leaders were battling and we capitalized on that to go up to the lead.  Then, it was just all about focusing; no mistakes and trying to pull a gap on Noah [Ping]. We pulled up to the back-markers and they were in the way a bit—which cost me, actually. We touched a bit, which let Noah get right back on me. I had to defend for about a lap before I could bridge a gap again. From there, no mistakes and brought it home for the finish.”

Lights out for F4 U.S. Race 3 is scheduled for 3:25 p.m. ET. The race will be available for live streaming on the SpeedTour TV’s YouTube page at YouTube.com/SpeedTourTV.