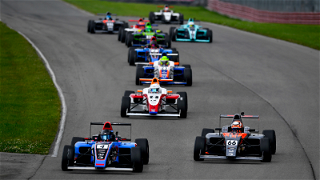 * These races will be streamed live at YouTube.com/SpeedTourTV.

Since F4 U.S.’s inaugural season in 2016, Mid-Ohio is the only circuit that the championship has visited each year and it has been the site of more F4 U.S. races than any other venue. Meanwhile, this will mark the fifth trip to Mid-Ohio for FR Americas, which only missed visiting the 2.24-mile road course during its 2019 campaign.

FR Americas and F4 U.S. will both compete as part of the Mid-Ohio SpeedTour event, where they will join the Sportscar Vintage Racing Association (SVRA), the Trans Am Series presented by Pirelli and International GT in an action-packed weekend. Spectator gates will be open Friday through Sunday, with tickets available for pre-sale at MidOhio.com or at the gate.

Watch this Weekend’s Races Free on Social
Fans at home will be able to watch this weekend’s FR Americas and F4 U.S. races free on social media, with streaming available on the newly-formed SpeedTourTV YouTube page (YouTube.com/SpeedTourTV). FR Americas will stream Race 1 (9:40 a.m. ET) on Saturday, and Race 3 (5:10 p.m. ET) on Sunday. F4 U.S. will stream Race 1 (11:40 a.m. ET) on Saturday, and Races 2 and 3 (9:00 a.m. ET and 3:25 p.m. ET, respectively) on Sunday. Be sure to subscribe and click the bell icon to turn on notifications for the channel to receive an alert any time SpeedTourTV goes live.

FR Americas & F4 U.S. Veterans Finding Success in Other Series
Several FR Americas and F4 U.S. drivers have been in the headlines lately for the success they’re finding as they climb the motorsports ladder. Kyle Kirkwood, the 2018 FR Americas Champion, recently announced his signing with Andretti Autosport for the 2023 IndyCar campaign. Just last month, Kirkwood joined David Malukas (2020 FR Americas Vice Champion) as two of seven rookies to compete in the 2022 Indianapolis 500.

Also in May, Kyffin Simpson, the 2021 FR Americas Champion, signed with Chip Ganassi Racing as a development driver for the 14-time IndyCar championship-winning team. Another FR Americas alum participating in an impressive driver development program is Ernie Francis Jr. After finishing third in the FR Americas standings in 2021, Francis Jr. was signed for the Penske Entertainment’s Race for Equality & Change program, where he is racing in Indy Lights competition with the Force Indy team this season. Also racing in Indy Lights this season is 2020 FR Americas Champion, Linus Lundqvist. With four wins so far this season, Lundqvist currently leads the Indy Lights point standings. Benjamin Pedersen, another FR Americas & F4 U.S. alum who is racing in his second season of Indy Lights competition, is set for his first IndyCar test with Juncos Hollinger Racing team next week.

Several Drivers Return to Mid-Ohio with an Experience Edge
Four drivers competing in the F4 U.S. field this weekend boast previous experience in the series at Mid-Ohio Sports Car Course. Both Matt Christensen and Gabriel Fonseca (No. 76 Crosslink Kiwi Motorsport Ligier JS F4) recorded a best finish of sixth at Mid-Ohio in F4 U.S. competition last season. They’ll look to improve on those this weekend. Other drivers in this weekend’s event with prior F4 U.S. starts at Mid-Ohio include Artie Flores (No. 22 Gonella Racing / Flexi Ligier JS F4) and Ryan Shehan (No. 66 Crosslink Kiwi Motorsport Ligier JS F4).

FR Americas Scholarship Up for Grabs in Championship Battle
With a scholarship on the line to compete in the 2023 FR Americas season, the battle is heating up in the F4 U.S. point standings. Lochie Hughes (No. 6 Jay Howard Driver Development Ligier JS F4) won the season opener at NOLA Motorsports Park to capture the points lead and has not looked back. Hughes currently holds an eight-point lead over second-place Matt Christensen. Nicholas Rivers sits third (-27 points) after winning a race at NOLA, while Noah Ping is fourth (-29 points) after winning his first race of the season at Road America. Bryson Morris (No. 39 Crosslink Kiwi Motorsport Ligier JS F4) and Alex Berg (No. 08 Doran-Kroll Competition Ligier JS F4) are both tied for fifth, 30 points behind the leader.

A Look Back at Road America
It’s been one month since FR Americas last took to the track at Road America. TJ Speed not only swept the weekend, but also swept the entire podium in Race 3 that weekend. Raoul Hyman (No. 27 Bethesda Holdings Limited / Solomon Capital Enterprises / Oaklands / Kinross Ligier JS F3), the current FR Americas point leader, won both Races 1 and 3, while teammate Jason Alder (No. 77 Drive for Diabetes Awareness / HAKUN Ligier JS F3) brought home the victory in Race 2 to claim his first win of 2022.

Championship Battle Heats Up with a Super Formula Scholarship on the Line
With a Super Formula scholarship on the line from Honda Performance Development and Honda Motor Co. Motorsports Division, the championship battle is starting to take shape with six of 18 races completed. Raoul Hyman currently leads the charge with 126 points. Hyman has finished on the podium in each of the six races to date, including three victories, two runner-up finishes, and one third-place result. Dylan Tavella remains within striking distance and sits just 23 points back with his five podium finishes. The New Yorker secured his first win of 2022 at NOLA Motorsports Park during the NOLA SpeedTour in April. Jason Alder (-43 points), Mac Clark (-56 points), and Ryan Yardley (-73 points, No. 78 Crosslink Kiwi Motorsport Ligier JS F3) round out the top five.