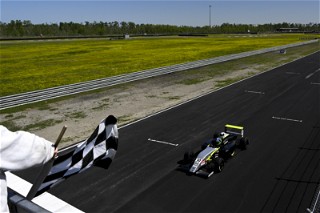 Lochie Hughes (No. 6 Jay Howard Driving Development Ligier JS F4) started on the pole after winning Race 1, but fell to third as a battle broke out between Morris and Christensen while working lap 2. Christensen secured the lead just before a mid-race red flag, and opened up a nearly three-second lead once the race returned to green. Morris set a steady pace on his Hankook Tires, focusing on hitting his marks, and slowly started to close the gap between drivers. Morris was able to get side-by-side with Christensen coming off of Turn 16 and set up a drag race down the front straightaway as they completed lap 14 and raced toward Turn 1. The Tennessee driver remained calm, focused on his own race and slowly drove away from Christensen. By the time they crossed the line to take the checkered flag, Morris had opened up a 2.923-second advantage.

“It was a really good race,” said Morris as he climbed from the car. “Matt was really far ahead, and I didn’t think I had him. I was just kinda going in second place. Then, I noticed that I was closing the gap slowly, and eventually I got there. I’m just super happy to take the win.”