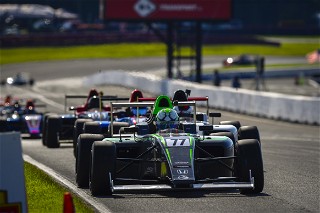 Season Opener at NOLA
The Formula Regional Americas Championship powered by Honda (FR Americas) and Formula 4 United States Championship powered by Honda (F4 U.S.) will both open their 2022 race seasons this weekend at NOLA Motorsports Park (NOLA) in Avondale, La. The FIA-certified series sanctioned by SCCA Pro Racing will feature 18 races scheduled at six different circuits across the United States in 2022, with each series completing three races during the NOLA SpeedTour event.

Global Appeal of FR Americas & F4 U.S.
The global appeal of FR Americas and F4 U.S. continues as drivers entered in the 2022 championships will represent four different continents and eight different countries. Drivers residing around the United States, as well as those from Mexico, Canada, Brazil, Bolivia, England, Australia and New Zealand will come together to race as the season kicks off at NOLA.

HPD Scholarship On The Line
The drivers competing in FR Americas have more than just bragging rights on the line for their end-of-season championship. In addition to prizes like a custom OMP race suit, a carbon Bell Helmet and a Bell athlete contract on the line, HPD has put together an elite scholarship package for the 2022 FR Americas Champion. HPD and Honda Motor Co. Motorsports Division (HM-MS) will award the championship-winning driver with a Super Formula Scholarship valued at up to $600,000. The scholarship will pair them with a Honda-powered team and engine supply for the 2023 Super Formula season, while naming them as an official Honda and HPD brand ambassador throughout the season. The winning driver will also enjoy a Honda heritage experience from HM-MS in Japan, including a tour of the Motegi museum and the ability to participate in HM-MS driver activities.

FR Americas Back in The Big Easy
FR Americas returns to NOLA for the first time since the series’ inaugural 2018 season. The penultimate round of the championship that year, NOLA served as the track where Kyle Kirkwood wrapped up his championship run after winning 15 of 17 races. Kirkwood, the reigning Indy Lights Champion, is racing in the IndyCar Series this season, piloting the No. 14 for A. J. Foyt Enterprises.

Home Race for Hayden Bowlsbey
Hayden Bowlsbey is celebrating a home race this weekend at NOLA. Bowlsbey resides in Folsom, La., just 50 miles north of Avondale, La., where NOLA is located. The 18-year-old will enter his first year of FR Americas competition in 2022, racing with the newly-formed and veteran-owned and operated IGY6 Motorsports.

Jason Alder’s NOLA Advantage
Jason Alder comes to NOLA with an advantage over many of his competitors – he has raced on the 2.75-mile circuit before. The Cooksville, Md., native has two previous starts at NOLA, both recorded earlier this year. In February, Alder raced at the Louisiana road course with the World Racing League where he joined two co-drivers for a pair of eight-hour endurance races. Finishing 3rd and 2nd, respectively, Alder looks to improve on his best NOLA-finish with FR Americas this weekend.

Championship Scholarship On The Line
Much like their counterparts in FR Americas, the battle in F4 U.S. is about more than just bragging rights—it’s about an opportunity for the next step in one driver’s career. HPD, Ligier Automotive, Hankook Tires, Parella Motorsports Holdings, Bell Helmet and OMP Racing have come together to award the 2022 F4 U.S. Champion with nearly everything they’ll need for the 2023 FR Americas season. An engine lease from HPD, chassis lease from Ligier, Hankook Tires for official sessions, carbon Bell Helmet, custom OMP Racing suit and entry fees from Parella Motorsports Holdings will be provided to the 2022 F4 U.S. Champion to help them step up to FR Americas in 2023.

19-year-old David Burketh, a Black American, will race in his first full season of F4 U.S. competition while driving the No. 8 under the Future Star Racing banner. The Laurel, Md., native had previously competed in three F4 U.S. events in 2020.

Madison Aust, a 17-year-old American from Mansfield, Texas, will make her F4 U.S. series’ debut at NOLA to kick off her full-time campaign. Racing with Crosslink Kiwi Motorsport, Aust will pilot the No. 09 Ligier JS F4.

F4 U.S.’ First Time at NOLA
F4 U.S. will make their first trip to NOLA since the series’ inception in 2016, to mark the 14th venue the championship has raced at in its seven-year history. It is the only circuit on the 2022 schedule that will see an F4 U.S. series’ debut, with each of the five other venues having hosted at least one championship event.