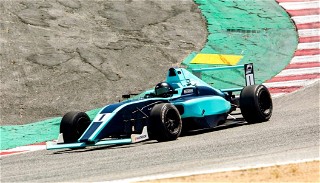 Max made his debut in the F4 United States Championship at Circuit of the Americas in Austin, Texas in October 2021, where the best young drivers showcased their talents in front of a 400,000 person record attendance on-site to also watch the Formula One World Championship.
Jensen team owner Eric Jensen states, "2022 will be our third year working together, and it's exciting to see how much Max has progressed in his quest to become a professional race car driver. Max has always been naturally quick, and as an experienced sophomore it should be fun to watch what Max is able to do on track with the best young drivers in the country who are competing in the F4 United States Championship."
With this week's announcement of the new Las Vegas Grand Prix, Formula One will have three races in the United States market in the 2023 season. Formula One is seeking to have American drivers join their grid as they emphasize audience growth in the US market. So as a marketable and talented California kid, Max Parker is an ideal candidate well placed to take advantage of the opportunities ahead for American drivers.

Jensen has a long history with developing young race car drivers, with many former drivers progressing on to paid professional racing careers. For the 2022 racing season, Jensen will operate competing teams in the F4 US and Formula Regional Americas Championships, which are the first two steps in the United States on the Formula One driver development ladder system.

For more details about Max Parker and his plans to race in the 2022 F4 US Championship, contact Eric Jensen via email at jensen@jensenga.com