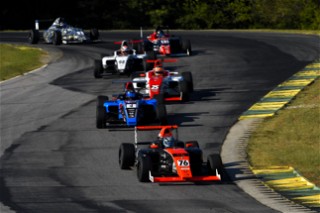 SOUTHLAKE, Texas (February 15, 2022) – With the race season just around the corner, the SpeedTour Formula Development Series has finalized their 2022 plans. Originally scheduled to take place on independent SpeedTour weekends, the series will now align with the schedules for Formula Regional Americas Championship Powered by Honda and Formula 4 United States Championship Powered by Honda (F4 U.S.). The change will give promising driving talent an opportunity to get an up-close look at the next step of their racing careers and establish relationships with the key industry players who can help them move to the next level.

“The announcement of the SpeedTour Formula Development Series last September led to several important discussions with team owners and industry partners,” said Tony Parella, CEO of Parella Motorsports Holdings (PMH). “We all agree there is a need for an additional step in the developmental ladder system on the Road to F1. The need goes beyond just establishing a series; it’s about developing the right structure to meet the needs of all of the stakeholders involved, including the drivers. Based on the conversations we’ve had and the changes we’ve made, I think we’re on the right track to build a series that will leave a positive, lasting impact on the sport.”

The SpeedTour Formula Development Series was created to provide up-and-coming racing talent with an additional opportunity to hone their skills with transitioning from karting to open-wheel competition, while keeping budgets in mind. The series utilizes the existing F4 U.S. chassis and features low entry fees with sanctioning by PMH.

Open to drivers ages 14 and up, the winner of the 2022 SpeedTour Formula Development Series will receive a scholarship from PMH to cover their entry fees for the 2023 F4 U.S. season.

Sanctioned by Parella Motorsports Holdings (PMH), the SpeedTour Formula Development Series looks to provide an entry point to the ladder system that leads to the top levels of open wheel competition. A step between karting and the wheel-to-wheel racing of Formula 4 U.S. Championship (F4 U.S.), SpeedTour Formula Development Series focuses on laying a proper foundation for race craft and education, as much as it does on-track competition. The series is open to drivers as young as 14 years old, and utilizes a cost-efficient model to further develop drivers’ skills with lower cost to entry. In 2022, the series will run four official race events.