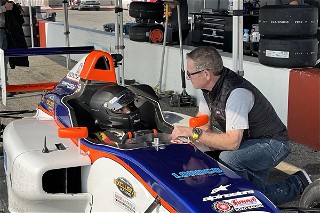 February 7, 2022 – With a handful of drivers already announced for the 2022 season, Doran-Kroll Competition has added another. Set to contest in the F4 United States Championship Powered by Honda, 15-year-old Alex Berg will pilot a Doran-Kroll Competition prepared Ligier JSF4. Making the move from karting to cars less than two years ago, Alex Berg is the son of ex-Formula One driver and 2019 Canadian Motorsports Hall of Fame inductee Allen Berg.

“I am delighted to announce that I will be joining Doran-Kroll Competition for the full 2022 F4 United States Championship Powered by Honda with my partners Penn Elcom, Jevitty Life Science and training partner MySim.ca,” expressed Alex Berg. “2022 will mark my second season in car racing, but my first season in open-wheel formula cars. The F4 US Championship is the right place to make that step up. I have completed several successful test days to get to learn the car and the team. Having combined knowledge of all the team members including Doran-Kroll Competition Director, and former IndyCar driver, Dominic Dobson, with his decades of experience in the industry, as well as team engineer Brandon Reed, I am 100% confident that we will be championship contenders in 2022."

“We are welcoming the Berg family to our team with open arms as we are very excited about the future that Alex has with our program,” explained Doran-Kroll Competition Director Dominic Dobson. “Alex has been around racing all of his life and understands the sport. With his father’s background, he has a built-in coach, but also a business manager that will help him be successful off the track. Our program has taken shape and we have acquired all the necessary tools to make him competitive and a winner on it.”

Alex Berg leveled up from karting to cars and was a Mazda Shootout winner. His father, Allen Berg, is the namesake of Allen Berg Racing Schools. Alex is top of his classes in school, a competitive racer on track and will be the leader in the Doran-Kroll Competition F4 program in 2022.

Allen Berg added, “I am delighted that Alex will have the opportunity to compete in the 2022 F4 US Championship under the excellent stewardship of Scott Goodyear, and with a great team like Doran-Kroll Competition. With the impressive track record of the team, Francois' and Jerry's experience in motorsports, along with Dominic Dobson actively involved as Competition Director, I am confident that this will prove to be a formidable combination to contest for victories, with the potential to run for the championship. We are grateful for the faith that DKC has placed in Alex by way of making him a part of the team.”

For more information on the Doran Motorsports Group, please contact Francois Doran at 951-922-3411 or via his cell phone at 951.897.0550. To contact him via email, Francois can be reached at f.doran@doranmotorsports.com or visit them online at www.DoranMotorsports.com.