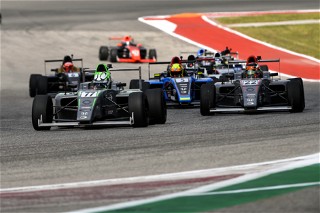 Jason Alder led Friday’s practice session at Circuit of The Americas (COTA) for the Formula 4 United States Championship powered by Honda. Alder, who is third in the championship points battle, logged 12 laps and recorded a fast-time of 2:17.513 during the only F4 U.S. practice of the Formula 1 Aramco United States Grand Prix race weekend.

“The car was pretty good,” said Alder, driver of the No. 77 Velocity Racing Development Ligier JS F4. “We want to qualify on the pole and come out of here with some wins. I know we’re a couple points back coming into this final weekend in the championship, but I know anything is possible—especially in Formula 4.”

If the weekend’s sole practice session is any indication of the championship battle about to ensue, it’s certain to be an exciting one. All four of the drivers in contention for the championship were among the top 10 in practice, and the fastest three laps belonged to three of those four drivers.

Nico Christodoulou, Alder’s Velocity Racing Development teammate who currently sits fourth in the points battle, was second quick in practice with a 2:17.664.

“The session was pretty good,” said Christodoulou. “We finished p2, just one-tenth back. Going to need to work on a couple things to get the top step. We’re looking to qualify in the top six and head into the race strong.”

“It’s been a difficult season,” said Leon, driver of the No. 19 for DEForce Racing. “We finished P3 in practice, and we’re ready for tomorrow’s qualifying. This track is amazing. It’s a pleasure to race in the same week with Formula 1.”

Mac Clark, who currently sits second in the points battle was tenth in practice with a lap time of 2:18.760.