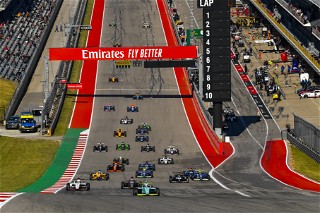 AUSTIN, Texas (October 21, 2021) - This weekend’s F4 U.S. Championship Powered by Honda season finale will decide the 2021 Driver Champion at the largest event of the year, in front of a sold-out crowd, at Circuit of the Americas for the FORMULA 1 ARAMCO UNITED STATES GRAND PRIX 2021 on October 22-24.

With four drivers mathematically eligible for the Championship, it will be a mix of strategy and luck as drivers navigate the 3.4-mile, 20-turn course with 29 other racers. Leaning hard on their Hankook Tires, the double-header event will see drivers showcase their talents on an international stage and climb the same podium as their Formula 1 ® heroes.

Currently leading the Championship is rookie Noel Leon from Monterrey, Mexico. The 16-year-old driver and reigning NACAM F4 champion is looking to add the F4 U.S. title to his resume. To date, Leon has piloted his No. 19 DEForce Racing machine to eight podiums, including two wins.

“I am very much looking forward to this weekend,” Leon said. “COTA is a very fun track and racing alongside Formula 1 will make this extra special. My team, DEForce, has done a great job throughout the season, and we are more than ready to win that championship!”

If Mac Clark has anything to say, Leon won’t bring home the trophy. The Campbellville, Ontario native is trying to become the first Canadian to win the F4 U.S. Championship. Matching the leader’s number of podiums, Clark is coming in strong with five wins, including one at last month’s VIRginia International Raceway event. Racing at COTA will be a bucket list item for the 17-year-old driver.

“Driving together with Formula 1 will be an incredible opportunity, and I’m really thankful that we will have a full house to showcase our series,” driver of the No. 26 Gonella Racing car said. “I can’t wait to actually race on the track because I’ve had some great battles on the sim. The long straights should create good passing opportunities for our F4 U.S. races. With the 2021 title fight coming down to the wire, I can only control so much as a driver, but I am pushing myself to be perfect. That’s what it’s going to take to bring home the Championship.”

Jason Alder has a Turn 1-style hill to climb mathematically, but he’s not letting past failures hold him back. The driver of the No. 77 Velocity Racing Development Ligier JS F4 is looking to add to his six podiums and four wins.

“The USGP is where it all comes together, the grand finale,” the Cookville, Maryland native said. “I have some work to do, being third in points and around 25 back, but I know the pressure is on Noel and Mac to get two decent finishes. I am coming for the Championship, so they better get ready!”

Alder’s teammate Nico Christodoulou was instrumental in helping to secure the Team Championship for VRD. The Canadian from Maple, Ontario is focusing on the top step of the podium to maximize his points opportunity.

“I’m looking forward to the final round of the season at a track I love and in front of the F1 crowds,” Christodoulou said. “We are currently sitting P4 in the Drivers’ Championship, but we haven’t lost hope. I still want to add to my seven podiums and one win on the year.”

Drivers will take to the track on Friday for practice, followed by qualifying and Race 1 on Saturday, with Race 2 taking place ahead of Sunday’s Formula 1 ® United States Grand Prix. A schedule for the weekend is highlighted below.

Fans can keep up with the action on social media and the website: