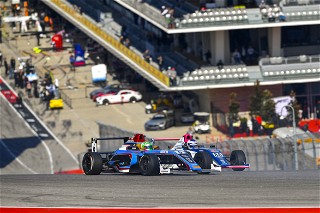 Honda Performance Development (HPD) has reaffirmed the organization’s commitment to the F4 United States Championship and Formula Regional Americas, as the title battles in both series come down to the upcoming season finale weekends at the Circuit of the Americas.

"Honda Performance Development exclusively partners with the F4 United States Championship and Formula Regional Americas for the development of North American single-seat racers," said John Whiteman, Manager, Commercial Motorsports for HPD.  "Both series are exclusively powered by HPD-prepared Honda engines; and have continued to grow under the leadership of Parella Motorsports Holdings, in partnership with Ligier and Hankook Tires." The FR Americas and F4 U.S. championships offer global developing drivers the opportunity to demonstrate their skills on an international platform, with affordability and safety as top priorities. Both series’ cars are powered by equally strong, reliable, HPD-modified versions of the current Honda Civic® Type R® engine, with the FR Americas powered by a turbocharged 303-horsepower edition, while the F4 U.S. series uses a normally aspirated 160-bhp engines.

In addition, the FIA, world governing body for motorsports, awards up to 18 "Super License" points for FR Americas competitors, and 12 for drivers in F4 U.S., more than available in any other North American development series.

Now in its sixth season, the F4 U.S. Championship continues to be the most successful F4 national series in the world.  The 2021 title will be decided at the Formula 1® United States Grand Prix in Austin Texas, in front of the Honda-powered Formula 1® teams fighting for the FIA World Championship.  The fourth FR Americas champion will be decided two weeks later at the Austin SpeedTour with SVRA, also at Austin, Texas.

About Honda Performance Development
Honda Performance Development, Inc. (HPD), has a rich heritage creating, manufacturing, and supporting Honda Racing and Acura Motorsports customers since 1993.  From pinnacle racing in INDYCAR and IMSA Sports Cars to commercial racing programs, HPD powers the dreams of professional and amateur racers from age 4 to 40+. HPD is a wholly owned subsidiary of American Honda Motor Co., Inc. and leads all of Honda and Acura’s high-performance racing programs in North America. HPD specializes in the design and development of powertrain, chassis, electronics, and performance parts, as well as technical and race support. HPD offers parts and race support to Honda and Acura amateur and professional motorsports racers and is continually expanding its palette of racing programs that make Honda racing products available to all racing styles, from karting and Quarter Midgets to the highest levels of pro racing.  For more information, visit: http://hpd.honda.com.