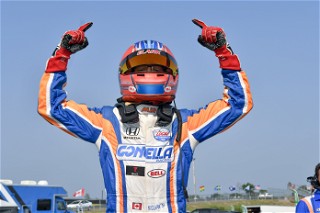 Mac Clark held off fellow Canadian Nico Christodoulou in a two-lap sprint to the checkered flag on Saturday for his fourth Formula 4 United States Championship Powered by Honda victory of the season  at Brainerd International Raceway in Race 2.

Driving the No. 22 Velocity Racing Development machine, pole-starter Christodoulou got the jump on second-place starter Clark with Noel Leon and Bijoy Garg pressuring the pair from Row 2.

An early yellow slowed the charge and on the restart, Christodoulou continued to hold off Clark and Leon. Series newcomer Bryson Morris challenged Garg for position on the restart, advancing from a fifth-place start to overtake the JHDD driver for fourth.

Dicing for position, sometimes going four-wide into tight turns with Morris and championship contender Jason Alder inserting themselves into the fight, Christodoulou continued to hold the point.

Momentary relief came for the VRD pilot on Lap 9 when Gabriel Fonseca spun in the Cloverleaf, brining out a brief yellow as safety crews pushed the No. 76  Crosslink/Kiwi Motorsport out of the sand. Fonseca continued the race under his own power, albeit a lap down. 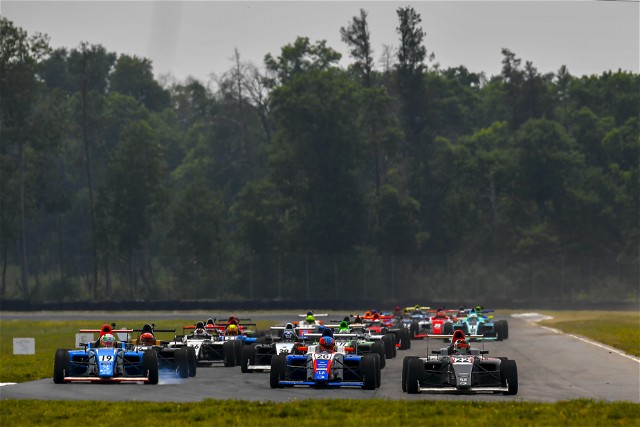 With the 30-minute clock ticking down, pressure continued to build for Christodoulou as the green flag dropped for the final time with four laps left in the session. Leon dropped wheels off course after the restart, allowing Morris to take the final podium position. On the same lap, Alder also had an off-course excursion. Second in the championship, Alder continued the race but lost valuable championship points finishing outside the top 10.

Christodoulou and Clark traded positions in the final laps with Clark making it stick with a daring outside pass in the Cloverleaf. Clark defending the line from Christodoulou, capturing the checkered just 0.209-seconds ahead of his Canadian rival.

Morris finished third with Leon and Matt Christensen rounding out the top five. Ryan Shehan had the drive of the race, making up 13 positions from a 22nd place start to finish ninth.

Jake Bonilla, Seth Foley and Arturo Flore did not start the race due to damages sustained in Race 1 earlier in the day.