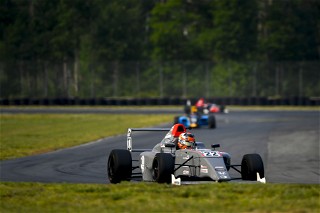 Traveling the furthest North in its history, Formula 4 United States Championship Powered by Honda made its official debut on Saturday at Brainerd International Raceway for the Ryan Companies US presents the Jed Copham Tribute Weekend.

Nico Christodoulou was fastest in qualifying with a 1:30.338-second flyer in the No. 22 Velocity Racing Development machine, edging out fellow Canadian Mac Clark by 0.039-seconds for his first pole position start of the season.

"I am extremely happy with the result today," said Christodoulou. "The team did such a good job with the car and assisted with a strategy to secure myself to the top for qualifying. For now it’s full focus on the races to come!"

Series newcomer Bryson Morris, who was fastest in practice, rounded out the top five.

The stacked 25-car field will take the Green for Race 1 after the lunch break at 1:35pm Central followed by Race 2 at 3:50pm Central. The races will be live streamed on the SVRA App: https://bit.ly/36FhASz