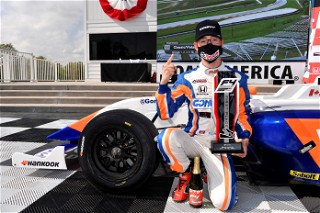 Full Race Report to Follow; Based on Provisional Results

In a five-lap sprint to the finish line, Mac Clark managed to stay ahead at the stripe for his second victory of the weekend for Gonella Racing.

In the final lap the lead changed multiple times in a heated battle between Clark, Noel Leon, Nico Christodoulou, Bijoy Garg and Matt Christensen. Garg was in second on the white flag lap, but dicing with Leon and Christodoulu in Canada corner cost Garg as he went wide at the exit and fell behind.

Leon held off a charge from Christodoulu at the line to finish second by a car length. Christodoulou rounded out the podium in third.

"Noel (Leon) gave me a good fight and we were able to pull away at the end after the restart," said Clark. "It was a really great race. The Gonella Racing car was really fast, so a big thank you to the team."

Garg recovered to finish fourth just pipping Christensen at the line. The Jay Howard Driver Development pilot set a new in-race track record with a 2:20.109-second lap, Bijoy will be awarded Pole Position for the start of Race 3 on Monday.

A first lap incident at in The Kink involving Oscar Haffar, Louka St-Jean, Chloe Chambers and championship leader Jason Alder brought out the red flag for an extensive clean up. All four drivers were transported to medical for precaution, but released following examination. The race resumed with 10 minutes remaining on the clock.

Alder was slated to start on pole but stalled before the formation lap, forcing him to forfeit his first place position and start from pitlane.