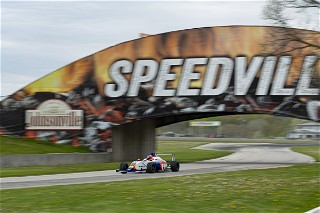 First out of the pits, Alder held the pole by early in the session, matching Clark, Garg’s and Leon’s times each lap. Without using the draft, the Velocity Racing Development driver looked like he was going to take pole with a 2:18.945-second time until Clark strategically used the slipstream from lapped traffic to propel him just enough to clench the point.

“We were first out and using the draft here would have been beneficial, but we still got a first-row start, I am happy with our position,” said Alder. “Qualifying was close and I know the racing is also going to be tight on Sunday and I am so excited for another winning result.”

Garg missed the test day earlier in the week to race at Indianapolis Motor Speedway as part of the Grand Prix weekend. Traveling overnight to Road America, Garg got up to speed quickly in practice and battled for pole in qualifying, holding the top spot for a couple non-consecutive laps. Garg ran a lap time of 2:19.132-seconds in the No. 6 Jay Howard Driver Development CSU/One Cure/Lucas Oil Racing car, just ahead of Noel’s 2:19.427-seconds in DEForce Racing’s No. 19 machine. Serving a five-grid penalty that carried over from Road Atlanta, Noel will now start ninth.

“I am happy with a P3, especially jumping straight into qualifying and after being out of the F4 for so long,” said Bijoy. “I would have liked pole obviously, but the second row is a good place to start especially with the draft into Turn 1. A lot can happen in the races with how long the straights are, so we are looking forward to them.”

Aries Deukmedjian will be striking distance from Clark and Alder, starting from the second row in the opening round. Deukmedjian’s personal best time of 2:19.512-seconds was only .756-seconds off Clark’s pace. Positioned in fourth, the Floridian young talent was the top driver for the seven-car Crosslink/Kiwi Motorsport squad.

VRD driver Nico Christodoulou and JHDD rookie Matt Christensen will start from Row 3. In his F4 U.S. debut event, Trevor Russell will take the green from Row 4 in seventh in the No. 32 TR Racing Ligier JS F4, sharing a row with Crosslink/Kiwi rookie Ryan Shehan. Momentum Motorsports’ Lucas Mann rounded out the top 10.

Sunday the drivers will compete in two 30-minute rounds (11:00 a.m. CT; 2:55 p.m. CT). The weekend wraps up on Monday with one final race going green at 9:30 a.m. CT. Live timing and scoring is available on Race Monitor. For more information visit www.F4USChampionship.com