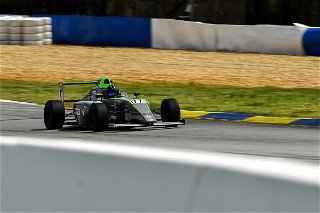 Making a head turning debut in the F4 United States Championship Powered by Honda, Velocity Racing Development driver Jason Alder now looks to carry that momentum into Elkhart Lake, Wisconsin. Competing in rounds four, five and six at the picturesque Road America circuit, Alder’s goal is not only to continue his winning ways but extend his championship point lead.

“When you are out front, everyone has a target on your back,” explained Alder. “I am very humble to have had such a great debut weekend. Winning has only made me hungrier.”

Exploding on to the scene, Alder was the driver to beat at Road Atlanta. Mastering changing weather conditions, the Legend Car driver turned open-wheel racer scored the round one win and round two victory, only to miss out on a clean sweep of the weekend with a second-place result in round three. Now, ready to attack the 4.048 mile, 14-turn facility, Alder has been getting ready by racing Mario Kart and staying sharp during the more than five-week gap between events.

Alder added, “It is good to let the first event soak in, but Monday when I got home after Road Atlanta, I was ready to go again. With Road America just around the corner, the anticipation is building. I know that the team and I are ready and am patiently waiting.”

With a different than normal race weekend schedule, Alder will hit the track on Friday for a pair of test sessions for the F4 grid. Saturday will include the final round of practice and qualifying while rounds one and two of the weekend roll off the grid Sunday. With a jam-packed weekend of racing, the F4 drivers will return to the 600-acre facility on Monday for their third and final race of the weekend.

“I am not sure if I have ever raced through a weekend and into a Monday before, but it is all the same for me,” continued Alder.

Jason Alder enters round four with a seven point advantage over his closest rival and has assisted the VRD program to jump out to a 42 point lead in the team championship points chase.