Jason Alder Victorious in Late Race Shootout to the Checkered 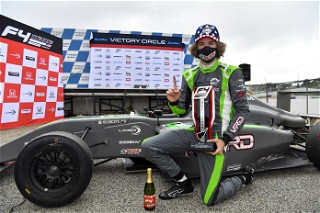 F1 was not the only open wheel series to kick off its season this weekend. The F1-feeder series Formula 4 United States Championship Powered by Honda opened its season on Saturday with a robust field of nearly 30 young drivers from all over the world. The first podium of the season represented all of North America with drivers from United States, Mexico and Canada on the boxes.

Leon held on to second with Christodoulou right on his gearbox, crossing the line in third.

"I want to thank Noel (Leon) for racing me clean all race," said Alder. "Congratulations to my teammate Nico (Christodoulou) for a podium finish for VRD. I want to carry this momentum all the way through the season." The racing started hot and heavy in the front with pole-sitter Leon going wheel-to-wheel with Alder into Turn 1, but the charge was short lived as a driver stalled on the F1-style standing start causing a two-car collision on the front straight. On the restart, Leon defended his lead, exchanging positions only once with Alder before the late-race full course caution. Leon lost the lead on the sprint to the finish line, he lead 10 circuits of the 13 lap race.

Christodoulou started the 30-minute race in sixth and worked his way up to a podium finish, his first under the VRD banner.

"I was able to get a good launch off the start," said Christodoulou. "We made good progress and this is a good start to the season."

Matt Christensen and Mac Clark rounded out the top-five.

Rodrigo Gutierrez had the run of the race, making up seven positions to put DC Autosport in the top 10.

Sunday will wrap up the weekend with Race 3 scheduled at its new time of 1:30 p.m. Eastern.

The full Atlanta SpeedTour weekend will be live streamed on the SVRA app. Download and Subscribe: https://bit.ly/3fpVysy