Linscott “moved” to Indianapolis, USA, in February to prepare for what she hopes will be her first full season in slicks and wings single seater race cars. Since the UK is in lockdown it’s meant she couldn’t train at the Everyone Active Basildon Sporting Village facility she normally trains at, so she is now preparing herself for race fitness at the world famous PitFit Training facility in Indiana.

The tenacious youngster decided to make the move to the US even though she hadn’t got the budget to race the full season; in fact, her sponsorship funding covered just the first two rounds. Like 2020, she and her mentor, Indy 500 driver, Pippa Mann, once again launched their #GetInvolved crowdfunding campaign to help raise the remainder of the budget to complete the first half of the season. Linscott recalls, “my supporters have been so immense as always and bought so much of my merchandise this year that we hit our initial target of $35k in less the 8 days. It’s still got another week to go so anything else we raise will go toward completing the season.” 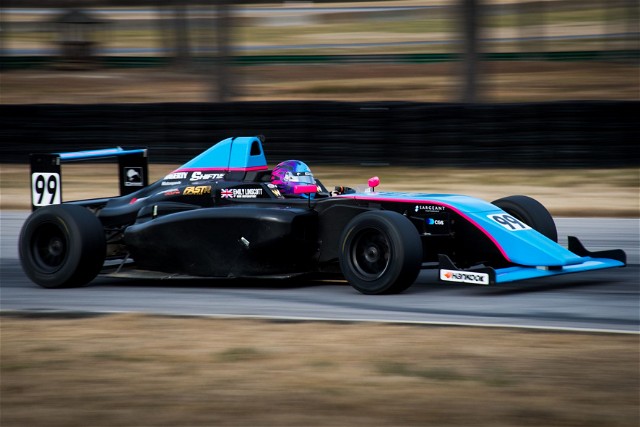 Linscott discussed the lead up to her first round at Road Atlanta on March 25-28th by saying, “I’m so excited about making my debut in USF4 this weekend, I’ve been desperate to race slicks and wings in single seaters since the end of 2018 but I’ve not managed to raise the budget until now. I know it’s going to be very tough as the championship is expected to match its historically large grids and there’s some incredibly talented drivers I’m up against with almost everyone having either a season of racing F4 under their belt or they’ve done massive winter testing programs, where I’ve essentially just done last week’s Official Two Day Test at Virginia International Raceway. Nonetheless, I’m ready to give it everything, as always! I need to be realistic about my target though, so my first hurdle is breaking into the top ten and then we’ll see what else I can do once I’ve learnt how to get the best out these cars.”

Some encouraging news for Linscott, “I’ve just been told that I now get to do round 4 so I’m fighting hard to secure new sponsorship to help me compete in the final two rounds of the championship,” said an excited Linscott.

As previously announced, Linscott was one of two recipients in the F4 U.S. Championship to be awarded a PMH Powering Diversity Scholarship. She mentions,” this award has really helped me get over the line on the grid this season, and I’m so proud to be representing girls and women in the world of motorsport. As they say, if you can see her, you can be her.”