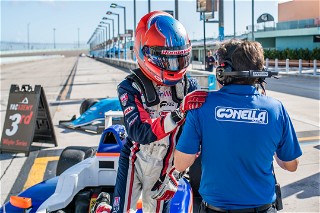 Gonella Racing is pleased to announce that Mac Clark and Artie Flores will be joining the team for the F4 U.S. Championship in the team’s first season in the series presented by Honda.

“I am thrilled that both Mac Clark and Artie Flores are joining Gonella Racing for the F4 2021 Season after a very successful winter series run this past February,” said team owner Ernie Gonella. “We are looking forward to working together.”

Canadian driver Mac Clark comes to the team with 6 years of experience competing in motorsports. After finishing the 2019 season of the F1600 Canada Program as Rookie-of-the-Year, Clark went on to become the F1600 champion in 2020. He will be driving car #26 with Gonella Racing.
Mexican driver Artie Flores has several years of karting experience, including in the 2020 SKUSA Winter series, and 2020 Florida Winter Tour. He has been making his transition to car racing with Gonella Racing, doing a series of tests throughout 2020. Flores is now ready for his rookie season in the F4US championship and will be driving car #23 with Gonella Racing.

The 2021 F4 US Championship Powered by Honda kicks off March 26th-28th at Road Atlanta.