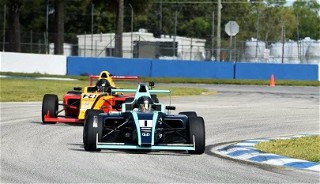 During the recent supported series test at Virginia International Raceway, Bonilla showed impressive speed posting top 5 times in most sessions despite being on a restricted t\program as the team debuted the brand new Ligier F4 car that the San Antonio native will drive in the 2021 F4 U.S. Championship season.

Oscar Haffar from New York City also showed impressive speed at the recent VIR pre-season series test, ending with a 9th place result in the final session (out of 20 drivers).

The 17 year old enters his rookie season competing in F4 U.S after completing a series of private tests as well as an SCCA competition race driving the Ligier F4 car at Sebring Raceway in Florida.

Jensen team owner Eric Jensen stated, "The main objective with our program is to select drivers who we can develop to have a realistic chance to become paid professional race car drivers. Jake and Oscar are clearly both talented, and we are working flat out to position them for their chance to live their dreams for a professional career in car racing.”

Formula 4 United States Championship Powered by Honda kicks-off the 2021 at the famous Road Atlanta circuit on the weekend March 26-28. For information, visit the series website at www.f4uschampionship.com

For information about Jake Bonilla and Oscar Haffar and their 2021 racing plans, contact Eric Jensen via email at jensen@jensenga.com

For information about Jensen Global Advisors and our driver development programs, visit the team’s website at www.jensenga.com