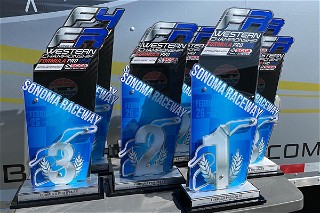 The 2021 Formula Pro USA Winter Series came to a close this past weekend at the famed Sonoma Raceway as Nick Persing and Jay Horak were able to come away victorious. Courtesy of the rounds three and four victories, both drivers were also able to secure their respective class championships as they closed the first two months of the season with momentum moving forward.

“The Winter Series is now behind us and we will shift our focus to our twelve race Summer Series that is right around the corner,” explained SK Morgan. “A huge congrats to both Nick and Jay on their championship performances as well as to the rest of the podium finishers and competitors of our Winter program.”

During round three of the Formula Pro USA F4 Winter Series, it was all Nick Persing. Claiming the class pole position and the fastest lap of the race, Persing drove to a commanding victory. Conner Martell would provide the excitement in round four as Persing went on to repeat his performance from the day prior. Martell had a 360-degree spin coming out of turn six but managed to keep it on the track and recover to finish in the second position. In the F4 Championship battle, Persing outpaced Ryan Yardley to the title as Conner Martell rounded out the championship podium. Bailey Paterson ended the four-round championship in fourth while Joseph Daniele was fifth.

On the FR side of the program, it was all Jay Horak in rounds three and four. Claiming the pole position, fastest race lap, and victory in round three, round four would prove to be a challenge for the 2020 series champion. With an issue to his Ligier JSF3 in qualifying and forced to start last, Horak worked his way through the field of fifteen to find his way to the front and top the podium blocks. Horak would once again score the fastest lap of the race as Sean Prewett and Scott Vreeland each earned a pair of second and third-place podium results respectively. Horak’s performance guaranteed his Winter Series Championship.

Morgan continued, “We have some major partner announcements on the horizon for the Formula Pro USA Summer Series program and can’t wait to communicate the news. All I can say is that we are pleased to welcome back our strong partners including Ligier North America, Honda Performance Development, Hankook Competition, Parella Motorsports Holdings, and Exclusive Racing, and encourage you to stay tuned for more news soon."