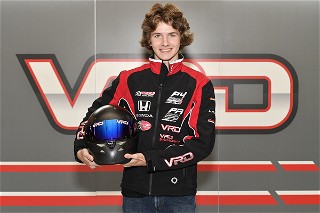 Confirming their first Formula 4 United States Championship Powered by Honda driver for the 2021 season, Velocity Racing Development (VRD) has inked Jason Alder to a full-season campaign. A champion in kart racing and a multi-time national title holder in the legend car ranks, Alder will move to the open-wheel program in 2021 and fly the VRD colors in his hopes to climb to the upper echelons of motorsports in North America.

"I am so excited to finally announce that I will be competing in the F4 US Championship with Velocity Racing Development in 2021,” expressed an excited Jason Alder. “I've wanted to compete in F4 ever since I heard about it in November 2019. For me to be a part of the series with such an incredible team is nothing short of a miracle, and something beyond my wildest dreams. Dan Mitchell and the rest of the team do such an amazing job developing and educating their current drivers to get them to the top step of the podium.”

“Jason has taken a completely different approach to racing, but his resume speaks volumes for his success throughout several different motorsport disciplines,” explained VRD’s Dan Mitchell. “He has won countless major races and championships and has shown so much enthusiasm for the future. His eagerness to learn is exciting to us as a team.”

Most recently, Alder was named the 2019 INEX Semi-Pro Asphalt Oval World Champion but his resume also includes five-time national champion, 2019 Bojangles Summer Shootout Semi-Pro Champion, 2019 Spring Battle Texas Champion, 2019 Winter Nationals Champion and two-time World Karting Association Gold Cup Champion. Jason is also involved with the Juvenile Diabetes Research Foundation (JDRF), a foundation that is near and dear to him and his family’s life. Jason is committed to helping JDRF with every new sponsor or partner that comes on board by donating 10% of every dollar to the foundation.

Alder continued, “VRD and my mindsets and goals are nearly identical, and I recognize how important that is moving forward. For 2021, I want to match their tenacious energy, by putting forth my hardest effort racing their car and keeping it in one piece to park it in victory lane.”

For more information on Jason Alder, please visit him online at www.IAmJasonAlder.comor search for him on social media via @IAmJasonAlder.