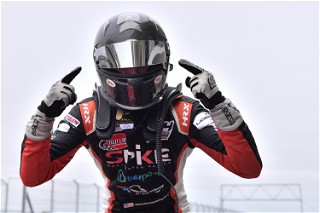 * Based on Provisional Results: https://bit.ly/37EFyiE

In a two-lap sprint to the checkered, Spike Kohlbecker claimed his second Formula 4 United States Championship Powered by Honda victory of the season in Race 2 on Sunday morning at Circuit of The Americas.

Wheeling this weekend for Velocity Racing Development, Nick Persing completed his best drive of the season, capturing his first podium career podium with a second-place finish. His VRD teammate Erik Evans rounded out the top three.

With an incredible jump off the line, Josh Sarchet (DC Autosport) moved to Blanco's inside on the 133 foot climb to Turn 1, and by the exit he was in the lead. Blanco, swarmed by a train of drivers was shuffled back in the mix to sixth place by the end of the first lap.

Sarchet held the point for three laps, but Kohlbecker did not make it easy on the No. 51 DC Autosport driver, matching Sarchet's speed lap per lap.

A short caution period for debris on the track grouped up the drivers and on the restart Kohlbecker got the jump on Sarchet to take the lead. Persing and Evans also with a good restarts caught third-place Nico Christodoulou off guard and the pair shuffled the Canadian back to fifth by Turn 1.

This left the door open for the Velocity Racing drivers to go to work on Sarchet. 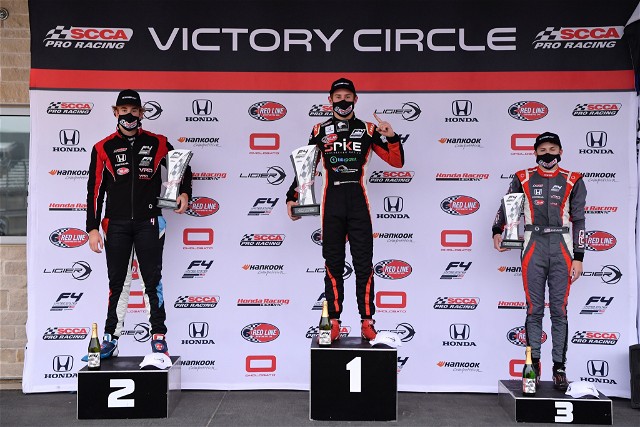 Persing managed to take second on Lap 7, sandwiching Sarchet between the No. 99 of Persing and the No. 29 of Evans. Evans passed Sarchet for third on the next lap, but the DC Autosport rookie repaid the favor on the following circuit before a full course caution slowed their battle.

The race switched back to green with four minutes left on the clock, just enough time for two more laps. Kohlbecker continued to control the pace on the restart with Evans slotting into third and Blanco charging into fourth. The fourth-place finish cliched the Vice Championship for the Puerto Rican pilot.

The clock ran out on Sarchet to make a move for position and he settled for fifth.

The drivers will take the green for the final race of the season at 12:40pm CT. Live stream at FanRacing.Live