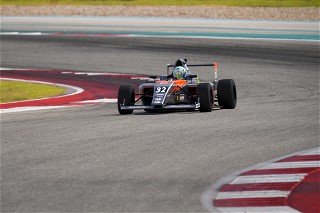 *Based Off Provisional Results: https://www.f4uschampionship.com/pages/circuit-of-the-americas-results

Jose Blanco secured the final Formula 4 United States Championship Powered by Honda pole position of the season on his way to setting a new Circuit of the Americas track record with a fast time of 2:15.530-seconds. The previous qualifying record (2:15.549-seconds) was set back in 2016 during the series inaugural visit to the circuit by Benjamin Pedersen.

With ambient temperatures in the low 50s on Saturday morning, drivers had to manage their Hankook tire temperatures throughout the 30-minute session. The top five times were only separated by .0.786-seconds.

"It was a tricky qualifying, it was cold with really low grip," said Blanco. "As the track warmed up, our tires came to temperature and we were able to go faster every lap. The car was amazing. We are currently second in the championship. My focus is to may smart decisions and focus on getting as many points as possible and see where we end up."

Blanco's Crosslink/Kiwi Motorsport teammate Spike Kohlbecker opened qualifying with an early lead, but Blanco was consistently catching the rookie's times and with about 11 minutes remaining in the session, Blanco slotted into pole-position where he stayed for the remainder qualifying. Kohlbecker fell down the running order before working his way back up to second with a 2:15.942-second flyer.

Unlike his teammate, Kohlbecker pitted with about five minutes left on the clock, a tire-saving strategy that could come into play later this weekend as he vies for the Vice Championship against Blanco.

Row 2 is filled with drivers who had their best qualifying of the season. Iron Rock Motorsports rookie Cade McKee (2:16.183-seconds) finished with the third fastest time while DEForce Racing rookie Nico Christodoulou (2:16.297-seconds) will start Race 1 from fourth place.

Series newcomer Viktor Andersson debuted with the fifth fastest time of the day (2:16.316-seconds), just 0.786-seconds off the pole-sitter's pace.

Race 1 will kick-off Saturday at 12:40 p.m. Stream the race live at FanRacing.Live